It’s been quite a while since TV viewers entered a dimension not only of sight and sound, but of mind. As of Monday, though — provided you’re a CBS All Access subscriber — you can once again journey through The Twilight Zone.

The highly anticipated revival, which counts horror auteur Jordan Peele among its executive producers, debuted Monday with two episodes: “The Comedian” and “Nightmare at 30,000 Feet,” the latter of which pays tribute to William Shatner’s iconic “Nightmare at 20,000 Feet” installment from 1963. (Weekly episodes will resume on Thursday, April 11.)

Before you give us your thoughts on “The Comedian,” which serves as the official series premiere, let’s recap what went down in the trippy episode:

Kumail Nanjiani (Silicon Valley) leads this installment as stand-up comic Samir Wassan, who is still struggling to find success in the comedy world after five years of gigs. (Somewhat bafflingly, he keeps trying out a politically fueled joke about the Second Amendment, which lands with a thud every single time.) One night, after a particularly rough set at Eddie’s Comedy Club, Samir meets J.C. Wheeler (30 Rock‘s Tracy Morgan), a comedian of whom Samir has long been a fan.

J.C. tells Samir that he needs to drop the political material and get more personal. If he shares stories about himself with the crowd, they’ll respond well, and — as J.C. hints with an ominous glint in his eye — Samir will surely be a successful comedian.

Samir tests this theory the following night (after his Second Amendment joke once again tanks), sharing some funny anecdotes about his mischievous dog named Cat. The audience breaks out in laughter, and Samir is thrilled… until he goes home and can’t find his dog anywhere in the apartment, only for his girlfriend to tell him they don’t have a dog. Even weirder? All photos of Cat have mysteriously vanished from his phone.

The following night, Samir’s 10-year-old nephew, Devon, sits in the audience for Samir’s set — and when his political material bombs again, Samir turns to Devon for inspiration, good-naturedly roasting the boy, much to the crowd’s delight. But when he looks out into the audience again, his nephew is suddenly gone. Panicked, he races home to tell his girlfriend that Devon is missing… only for her to inform Samir that she doesn’t have a nephew. In fact, her sister can’t even have kids, and why isn’t Samir being more sensitive to that? 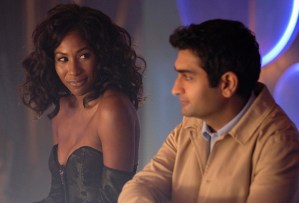 Samir grows more and more alarmed by the new effects of his stand-up, realizing that he’s not exactly murdering people when he names them on stage; rather, the subjects of his routine suddenly never even existed, and everyone else’s lives are immediately altered to reflect that fact as soon as Samir steps off the stage. But Samir suddenly realizes that he can use his new powers for good, too: Why not name-check the people in his life that he doesn’t like, or the guys who mistreated him in high school, or people he believes should be in jail for committing crimes? In an unsettling montage, Samir does exactly that, wiping a whole gaggle of people from existence as the crowd eats up his jokes, putting him on the path to success.

Of course, Samir’s new tactic eventually has its drawbacks. When he runs out of new names to drop in his routines, he decides to make some jokes about his girlfriend’s mentor from law school, David, who Samir thinks is a total creep who just wants to sleep with his former law school students. As expected, the comedy club audience loves Samir’s jokes about David — but when David gets erased from existence as a result, a horrified Samir realizes that his girlfriend’s entire life has been altered by his disappearance. If David was never her law school mentor, then she never had a career as an attorney… and now, in this new reality, she’s simply working as a waitress.

Near the end of the hour, J.C. Wheeler pays Samir another visit, and Samir is desperate to reverse all the havoc that his jokes have wreaked. But J.C. reminds Samir that he’s thisclose to achieving all of his comedy dreams, and all he has to do is bring down the house with one more routine. At first, Samir is reluctant to perform again — but once he gets on stage, he has a bit of a mental breakdown, maniacally listing dozens of names, most of which aren’t even attached to a joke. (He even makes his friend — and fellow comedian — Dede disappear, after learning she’s his only competition for a gig on a late-night variety show.)

Samir’s girlfriend shows up midway through his wild on-stage tirade, revealing to the crowd that Samir’s journal of joke ideas is really just a cryptic list of names. Samir pauses, seemingly prepared to make his own girlfriend vanish from existence — but instead, he starts telling jokes about himself, mocking his own desire to be a successful comedian. The audience laughs harder than ever, and Samir ends the set by yelling his own name to the crowd… and just like that, Samir is erased.

Once Samir decides to make himself vanish, all of the people he previously erased come back, and they all seem content with their lives. But at the end of the episode, Samir’s friend Dede suddenly encounters J.C. Wheeler at the bar — and she earnestly asks him for some career advice, just as Samir did.

OK, your turn. What did you think of The Twilight Zone‘s first outing? Grade Episode 1 in our poll below, then drop a comment with your full reviews of the premiere!