As the Arrowverse’s very wild child resumes Season 4 tonight at 8/7c on The CW, viewers will not only get a front row seat to circa 1960s Mexican wrestling, they will start to witness a handing off of the Big Bad baton from Nate Heywood’s father, Hank (played by Back to the Future‘s Tom Wilson), to Neron, the demon whose bidding the Pentagon bigwig has unwittingly been doing.

“Before Nate’s father was Tom Wilson, our notion of the Big Bad was always a military guy who works for the Pentagon who is going to torture [magical] creatures and turn them into super soldiers — whatever the stock superhero plot is,” Legends showrunner Phil Klemmer tells TVLine. “But when we saw Tom Wilson in action and got to know him as a person, immediately our plans were dashed. We were like, ‘He can’t just be the bad guy. There’s something deeply lovable about this human being.’”

As a result, “Hank’s agenda sort of changes” in the weeks ahead, just as his plan for the magical creatures threatens to be exposed, all while Neron — whom Hank believes to be just a deep-pocketed benefactor — grows restless.

“Hank got into bed with him” under false pretenses, “but he will eventually come to know the truth,” says Klemmer. “He’ll realize how this person who has been staking his original plan wants to use the Time Bureau.” And as this crisis of conscience starts to build, it will give new layers to the father/son dynamic — which also has been flipped from the original plan. 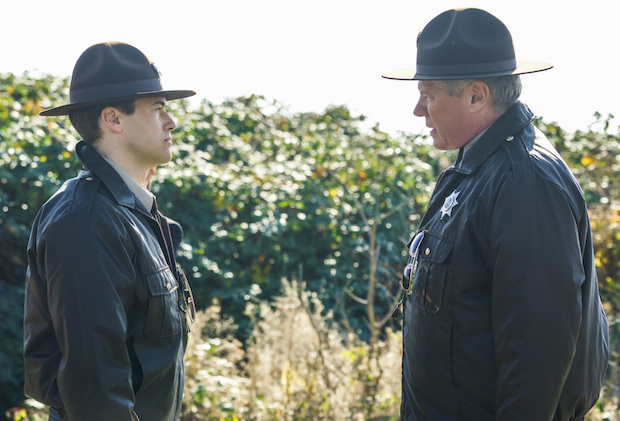 “Our first impulse was, ‘Hey, what if Nate (Nick Zano) gets, like, turned sinister by his powerful father? What would an adult son do to get back in his old man’s good graces?’” the EP shares. “But we realIzed it was more interesting to see how a dad would be changed by a reconnection with his son. What would it be like for this stern, ‘master of the universe’ guy to be changed by his bohemian, dips—t son?” (You may recall Klemmer last summer teasing infighting amongst the Legends in Season 4; that apparently was to be sparked by Nate, but no more.)

In the meantime, the Legends will slowly come to realize that Hank and his Men in Black mean to do harm to the escaped kaupe and others. And that will seed the first conflict for Sara (Caity Lotz) and Ava (Jes Macallan) since they became much more than time-monitoring colleagues. “As we make things more complicated between Nate and his dad, at the same time you inadvertently do the same thing between Sara and Ava, since they represent the heads of these two institutions that are kind of falling out of sync,” Klemmer notes. “The Legends have been effectively working cheek to jowl with the Time Bureau, so we were looking to complicate things.”

But make no mistake — amid the aforementioned conflicts, typical Legends insanity is in extremely good supply. On the heels of the midsession premiere grappling with Lucha Libre, there’s an episode that merges a truth-telling President Nixon with both a National Lampoon’s Family Vacation-style toad trip and an “homage to the late, great Burt Reynolds” via Smokey and the Bandit. (“I think I’m the only person in the writers room who was alive during the ‘70s,” Klemmer laughs. “I was like, ‘This is what road movies were! This is what cars used to represent!”)

What follows that includes a crowd-pleasing Bollywood-themed episode (that a fellow TVLine staffer has rewatched at least twice) and, eventually, a trip to H-E-double hockey sticks. Envisioning Neron as “Elon Musk as a demon,” the CW series will present the land wayyyy down under as “1980s Wall Street — Oliver Stone’s version of ‘Greed is good,’” says the showrunner. “We liked the idea that Hell is a stodgy place with an ‘80s aesthetic. “[Eddie Murphy’s] Trading Places is a pretty good reference, too.”