The only thing sadder than snubbed Snickerdoodles is the circumstances under which they came into play in Legends of Tomorrow‘s midseason premiere.

In the wake of the Kaupe escaping the Time Bureau after Hank’s Men in Black tried to abduct him, theories abounded about who was to blame. Once Nate and Zari pinched a file from Hank’s phone that proved a security cam had been tinkered with — confirming that Mona did not set the magical creature free — the Legends were pitted against the Time Bureau just like in the olden days. So as her team did everything they could to ensure that the Kaupe finished one final Mexican wrestling match and then evade capture, Sara atypically hung up on an anxious Ava, whose own minions were tracking the werewolf; later, Ava hung up on Sara in kind.

In the end, Mona helped the Kaupe elude the Time Bureau and paved the way for him, if not with her, to live out his life in idyllic Hawaii. But just as he was about to step through a portal, one of Hank’s goons shot dead the creature. Witnessing the tragic murder, Mona herself transformed into Wolfie, apparently seeded with magical creature DNA from the scratch she recently suffered.

Just prior to Mona’s “coming out” party, Sara checked in on Ava, toting the aforementioned cookies. And the conversation that followed was painful to hear: 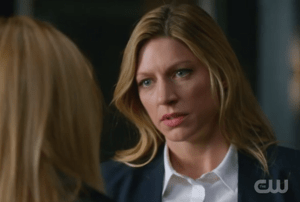 “I needed one thing from you today, Sara. For you to be in my corner. That’s all I asked,” Ava noted, to which Sara contended that Hank is the real problem at hand, torturing magical creatures as he his.

“Who cares?” Ava shot back. “A few weeks ago, the Legends were sending them to hell. Since when is protecting magical creatures… more important than protecting me?” 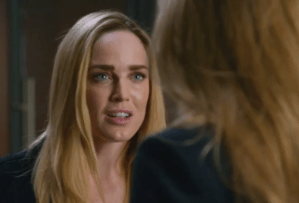 Sara, like some viewers I imagine, remarked on Ava’s “callous” attitude towards the Kaupe et al. “My priority is to protect history, Sara. Human history,” Ava countered. “If Hank has to experiment on a few creatures to find a better way to fight them, then so be it.”

Sara then made the mistake of pointing out that despite Ava’s fears that Hank will shut down the Time Bureau and put people out of work, the Legends are Teflon. “Oh my God, Sara, everything is not about you,” Ava roared. “Do you understand you are asking me to risk everything, for what? Some conspiracy theory, for a bunch of monsters…?”

“For me,” Sara suggested.

“Well, I’ve already given you everything I have to give,” Ava reported. “Today, I asked you for one thing—”

'Ship Shape: How Your Favorite Pairs Are Faring 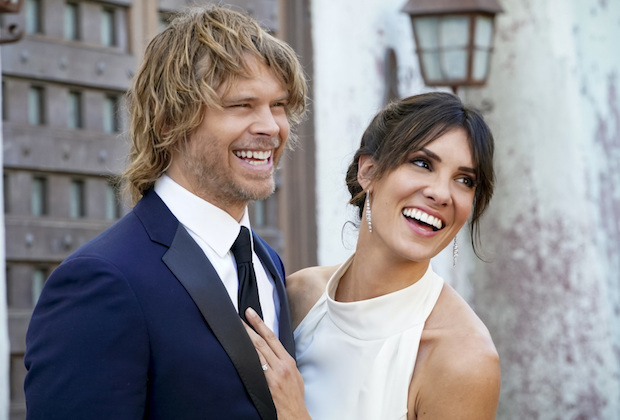 But is “Avalance” done? Probably not.

As showrunner Phil Klemmer explains, “Our seasons are just so run-and-gun that we were like, ‘God, we really need to give Sara and Ava a human-scale story.'” Ergo, their understandable clash over how best to handle magical creatures but, more importantly, how not to betray one another in the process. “We never wanted to manipulate people with giant oscillations in their relationship, where it’s like, ‘We’re broken up,’ ‘We’re back together,’ ‘We’re getting married, whatever,” says the EP. “We wanted to play it true to life.”

The fight excerpted above served that purpose, though Klemmer acknowledges that great care was taken to give each leader a leg to stand on.

“It’s funny — we did get into a lot of arguments in the [writers] room about the rights of magical creatures,” he shares with a laugh. “Magical creatures as far as I know aren’t real, but we did have a pretty bitter split in the room between people. And I personally take Ava’s point of view in that.”

For example, Klemmer points out that while “Sara is the head of what is essentially a family,” and one that she lives with, “Ava is a DC bureaucrat who has to deal with personnel. She has to be a real follower [of rules], while Sara is a seat-of-her-pants improviser.” And while the differences between them sparked an early, irresistible interest, here is an instance where it fed a rift.

“They’re attracted to each other because of those conflicts in style, but at the same time, Ava is right in calling Sara out for being cavalier and not understands the burdens felt by Ava, who doesn’t have the luxury of being fancy-free.”

Things between the ladies will get especially “human-scale” on Monday, April 22, in an episode devoted to their trip to “a hellish version of IKEA,” Klemmer shares (perhaps unaware the term he just used is, you know, redundant).

“There is so much adventure and fantasy on our show, we wanted to take this sort of larger-than-life couple and challenge them by making them do something totally normal,” he elaborates. The result is “definitely a trial by fire that leaves them galvanized” as a couple.