Following the most stressful trip to Hawaii since the Brady kids pissed off that tiki god, American Idol‘s Top 20 returned to Los Angeles for another round of performances.

Since we’re getting to spend a little more time with each performance from this point on, I’ve decided it’s time to start handing out completely superfluous grades for each. Because, hey, aren’t we all judges here?

MADISON VANDENBURG | “Domino,” Jessie J
First of all, I commend anyone brave enough to take on a Jessie J song live, though I shouldn’t be surprised that Madison crushed this performance, opening confidently and finishing strong. I feel like even Jessie J would have been like, “Well, damn.” (But enough with the Kelly Clarkson comparisons, right?)
Grade: A- (Click here to watch)

SHAWN ROBINSON | “Jealous,” Nick Jonas
The more time we spend with this sweet soul, the more I love him, so my heart basically grew three sizes when he recalled being bullied for his voice. (Who did this? Seriously, tell me their names!) This wasn’t a perfect performance, but he redeemed himself by climbing the ladder up to that high note. I also appreciate that he really seems to be growing every time he takes the stage.
Grade: B+ (Click here to watch) 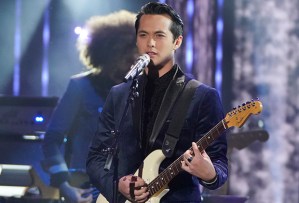 LAINE HARDY | “Bring It On Home To Me,” Sam Cooke
Here’s the thing: It’s hard for me to know how I actually feel about Laine because it seems like the show is telling how I’m supposed to feel about him, certainly more so with than any other contestant. I thought he took his performance to some fun places tonight. He’s got the voice, he’s got the look, and he’s clearly got a whole closet full of suits. So… party on, I guess.
Grade: B+ (Click here to watch)

UCHE | “Figures,” Jessie Reyez
From those chill-inducing runs to his incredible belting, Uche crushed this performance. And good on him for picking a song that speaks outright about bisexuality. I appreciate that he’s showing us more sides of himself as he becomes more comfortable on stage.
Grade: A (Click here to watch)

EDDIE ISLAND | “Ho Hey,” The Lumineers
This is the definition of a perfect song choice. There was something especially emotional and sweet about Eddie’s plinky-plunky take on the folksy jam, and even when his voice faltered (ever so slightly), his personality always sustained the performance.
Grade: A (Click here to watch)

EVELYN CORMIER | “Leaving on a Jet Plane,” John Denver
A true siren if ever there was one, Evelyn did it for me on every level tonight. I wouldn’t have expected anyone from the Top 20 to pick this song, but I’m so glad she did. Her voice is just pure pleasure.
Grade: A

ALYSSA RAGHU | “Ain’t It Fun,” Paramore
I actually thought this was a pretty good artist-song match, unlike Luke Bryan, who felt that it didn’t showcase the Alyssa we’ve come to know. I feel like she’s still figuring out who that is, so I was OK with her switching things up a bit and choosing a song the judges wouldn’t have chosen for her. And she’s definitely getting more comfortable, which is always a plus.
Grade: B (Click here to watch)

RYAN HAMMOND | “You Say,” Lauren Daigle
Yes, he performed the heck out of this ballad, but I’d love for Ryan to give us something that doesn’t make me want to shut off all the lights and rock back and forth in the fetal position whilst rethinking every romantic decision I’ve ever made in my life. (You know, unless that’s your thing.)
Grade: A- (Click here to watch)

RAQUEL TRINIDAD | “Lovefool,” The Cardigans
This future Nobel Peace Prize winner did serious justice to a true ’90s classic, serving up a funky performance that had Lionel Richie straight grooving in his chair. We should all be paying more attention to this one. (Also, I thought her outfit was incredible even before I realized it was a jumpsuit.)
Grade: A

LOGAN JOHNSON | “Love Don’t Live Here Anymore,” City and Colour
A total 180 from what he gave us in Hawaii, Logan went real serious tonight, even if he spent most of the performance smiling for the cameras and flirting with the front row.
Grade: B (Click here to watch)

DIMITRIUS GRAHAM | “Hello,” Adele
Like Katy, I was a little unsure of what to expect when Dimitrius began the song almost operatically. I was also worried that he would let the audience throw him off when he turned around, but he ended up feeding off all that energy and delivering a powerful performance. This was a huge risk that paid off big time. (That said, Luke’s assertion that “Every time you open your mouth, we find somebody else inside” sounds like the plot of a horror movie.)
Grade: A-

RILEY THOMPSON | “Jolene,” Dolly Parton
Though she rebounded in the end, Riley’s voice got lost a few times throughout this performance. And it brings me no joy to say that, as I still believe in her. Nerves, perhaps?
Grade: B (Click here to watch)

WALKER BURROUGHS | “How Deep Is Your Love,” the Bee Gees
I’m not sure if this really felt like the Walker we’ve seen in previous performances, but I enjoyed this unexpected take on a familiar song. I get that he probably wanted to prove he’s more than just the kid behind the piano, but I’m not sure that’s such a bad thing. I like that kid!
Grade: A (Click here to watch)

BUMBLY | “Vision of Love,” Mariah Carey
Color me impressed. This was a great song choice, one that really showed off her range. That last run was kind of all over the place, but whatever.
Grade: A- (Click here to watch)

ASHLEY HESS | “Dreaming With a Broken Heart,” John Mayer
Nothing against her performance in Hawaii, but I was glad to see Ashley back at the piano tonight for this incredibly emotional number. It really felt like she was singing about someone.
Grade: A- (Click here to watch)

ALEJANDRO ARANDA | “I Fall Apart,” Post Malone
At this point, Alejandro is like the human equivalent of This Is Us. He just makes you cry, OK? Not only were his vocals stunning tonight, but he gave us something a little different with the guitar and I loved it.
Grade: A+

KATE BARNETTE | “Sunday Morning,” Maroon 5
Katy put it best: “That was dope!” This chill performance really did check off so many boxes, which is a good way of describing Kate as an artist. Brava!
Grade: A (Click here to watch)

JEREMIAH LLOYD HARMON | Make You Feel My Love,” Bob Dylan
What do you even say about a performance that makes Lionel literally start praying midway through? As expected, this was another raw, emotional, stunning performance from Jeremiah. As with Ryan, I guess I’d like to hear Jeremiah try something more upbeat, but there’s a naturally inspirational tone in his voice that I wouldn’t want to get lost. (Side note: I was excited to see Jeremiah’s friends — plural! — in the audience tonight. He deserves all the support in the world. After all, as Katy explained, he’s literally a gift to music. From the universe.)
Grade: A+

LACI KAYE BOOTH | “I Want You To Want Me,” Cheap Trick
Turning this into a ballad was a stroke of genius. Not only did the lyrics resonate on a whole new level, but it fit Laci’s voice perfectly. This was really beautiful.
Grade: A+

WADE COTA | “All I Want,” Kodaline
I said last night that you never know what to expect from Wade, and I definitely didn’t see this coming. I thought it was intense at the start, but by the time the song reached its climax, I was gobsmacked. The way he effortlessly flipped between a beautiful falsetto and a full-on grown was borderline mystifying. As with Alejandro earlier, the judges really didn’t know what to say… but thank you.
Grade: A+

Your thoughts on Monday’s American Idol? Vote for your five favorite solo performances below, then drop a comment with your full review of the evening.