9-1-1‘s Doug-Maddie-Chimney saga reached a heartbreaking (and somewhat heartwarming?) conclusion on Monday as Maddie fought tooth and nail to escape her abusive ex, until one of them was left dead in the snow.

Meanwhile, nervous fans were likely delighted to learn that Chimney survived being stabbed by Doug, resulting in his long-awaited reunion with Maddie in the hospital.

Below, Jennifer Love Hewitt discusses Monday’s harrowing episode with TVLine, including how the ordeal will affect Maddie moving forward:

TVLINE | Congratulations on this incredible episode. Did you have any idea your role was going to become so physical?
No, I didn’t! In fact, the nicest surprise this season was that they didn’t let [Maddie’s story] go. It would be really easy on a TV show to have her come in, tell her story and then the show never really does anything about it. You keep it in the background of who she is, but you move on. So I was really grateful to Fox and to Tim Minear for letting Maddie’s story play out. Because of the nature of the subject matter, I feel like that was really important. And because it’s hard for people to watch, it’s difficult to talk about, it’s hard to picture, that made it worth it to me. It made me excited and grateful that this is who Maddie is; it’s not just a story she told for five minutes in the first episode. We got to see a payoff. But I had no idea where it was going to go, or how dark or how deep.

TVLINE | I’m sure working with your husband added a trust factor, but those scenes still must have been really intense.
Oh my gosh, it was super intense. But yes, the trust factor was a game changer. Had [Doug been played by] a stranger I met in hair and makeup for five seconds, that would have changed it. I still would have given it my all, but it would have been different. Our trust allowed him to be as bad as he could be. Both of us were able to be there for each other in that way, and to get really raw and ugly. We could be all those things we needed to be in the moment, because we knew that things would be OK later. 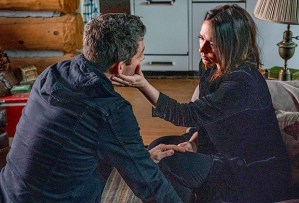 TVLINE | I still can’t believe how perfect that casting is. How did your husband also become Maddie’s husband?
[Laughs] It was Tim’s idea. He had given Brian one of his first jobs back in the day, so when I came on the show, Tim said to me, “You know I knew your husband before you knew your husband, right?” They had a whole bromance and really loved working together. So in my first episode, Doug’s voice was on the other end of the call, and Tim randomly said to me, “I think I’m going to use Brian’s voice. That’ll be fun.” At that point, I didn’t know if we’d ever see Doug. He was just the voice in that first episode. So when it came time for the episode [that introduces Doug], I said to someone in hair and makeup, “I wonder what they’re going to do about Doug.” She was like, “It’s your husband,” and I went, “Wait, what do you mean?” She said, “We just came from a production meeting.” It felt weird, but it was really exciting and cool.

TVLINE | I also appreciated it as a mini Client List reunion.
Yes! Brian and I have joked about how he’s now played my husband twice, and they’ve both been very bad people. [Laughs] So I’m very glad in real life that he’s a good guy and husband and father.

TVLINE | We did get to see glimpses of Doug’s softer side in those flashbacks. It was incredible how things could just turn on a dime.
I’m super proud of the work he did in this episode. And I think his portrayal helped to show a little more of why she stayed for so long. He did have good moments, and he was very charming in those moments. I was glad that Tim wrote that in and allowed people to see that, too.

TVLINE | How is this whole thing going to affect her moving forward?
In subtle ways. As much as this episode was about Maddie and Doug, the show is really about the crew and the calls and all that. So you’ll see Maddie figure out how to put one foot in front of the other with the knowledge that she’s killed someone. She’s grieving a very tumultuous relationship that’s been a huge part of who she is since she was 18 years old. We’ll see how she attempts to move forward in romance, if that’s even possible. All of those things, while answering phones and having to be a total Steady Betty for people during emergencies. It won’t be in big plot points or moments, it’ll be more in smaller ways. You’ll see that it’s affected her. It’s going to ebb and flow.

TVLINE | I’m glad they’re going to let that play out.
The truth is, there are real people who will be facing these situations while the episode airs, or tomorrow, or the day after that. Men, women, children. And they don’t just go away. It’s never not a part of who you are, so I’m glad they’re allowing it to be that way for Maddie, out of respect for the real fighters out there.

TVLINE | I’m also glad that Chimney and Maddie reunited. People are really responding to that relationship!
It’s so sweet! I’m so glad. It was one of the first conversations Tim and I had when I joined the show. We were just talking about things, and I said I really wanted Maddie to date Chimney. He was like, “What?” I said, “I just think it would be so sweet.” They’re such innately good people, and they’ve been put in these crazy circumstances. But they’re sweet and silly and I just love it. It really means a lot that the audience has responded the way they have. Kenny [Choi] and I have a lot of fun off camera, giving our cast mates a hard time by saying that Chimney and Maddie are the new Ross and Rachel of dramatic television. We totally are. [Laughs]

TVLINE | Ross and Rachel never did karaoke.
That’s true! And they should have. … The other day, Tim asked me what I want to do the most in Season 3, and I was like, “Um — karaoke!” So hopefully we’ll be back for another duet.