Sunday’s (three-hour!) American Idol narrowed down the competition considerably, selecting only 20 singers to return to Los Angeles for yet another round of cuts ahead of the season’s first live show. As for the singers who did not make it through, I imagine they… just stayed in Hawaii, I guess? That’s what I’d do.

OK, let’s begin by discussing the the singers who did make it through to the Top 20, a list that includes most of TVLine readers’ 10 favorite contestants:

ALYSSA RAGHU, 16 | Katy’s “sauce” returned this season more committed than ever, having filled her post-Season 1 calendar with voice lessons, dance classes and more than 200 live opportunities, all of which came through in her performance of Meghan Trainor’s “Dear Future Husband.” Not only were Alyssa’s vocals on point, but as Katy noted, her dancing “looks natural, finally!” Katy always thought her voice was “timeless,” but it was in repairing that “disconnect” that ultimately produced a recipe for success. [Insert Italian chef kiss emoji. … Is that even an emoji? If it’s not, it really should be.]

MADISON VANDENBURG, 17 | From that killer opening riff in The Jackson’s “Who’s Lovin’ You,” it was apparent that Madison was about to blow the roof off the venue… or at least she would if the venue wasn’t already outdoors. It was a flawless performance from start to finish, ending with a jaw-dropping note that inspired this face from Katy: 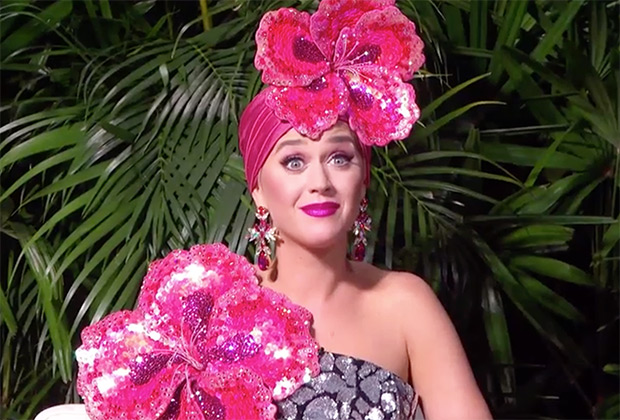 I’m not entirely sure why the show felt the need to set up a faux rivalry between Madison and Myra Tran, who gave us something entirely different with her performance of “How Far I’ll Go” from Moana. She was so overcome with emotion after her performance — and after her elimination. Prepare to have your heart broken all over again: 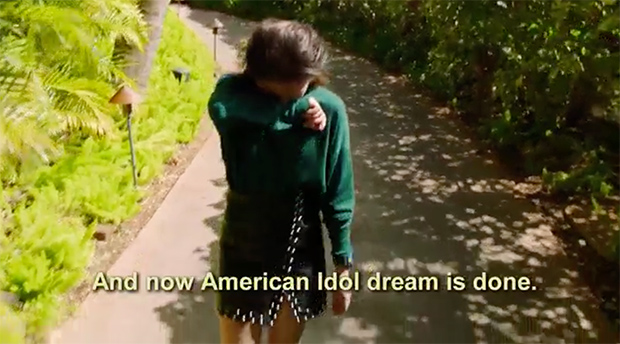 LOGAN JOHNSON, 20 | Easily one of the biggest surprises of the night, Logan’s first performance with an audience was basically the Idol equivalent of Justin Bieber opening for the Jonas Brothers. (Or vice versa, I don’t want to fight about it.) He promised “a little twist” on Bieber’s “Sorry,” but I’m not sure anyone — least of all Katy — was prepared for him to slip into Spanish midway through. (“He’s from Boise, Idaho!”) Logan’s impressive vocals also proved that he’s got the substance to back up the style, and I’d be surprised not to see him in the Top 10.

DIMITRIUS GRAHAM, 27 | Though I didn’t appreciate Idol attempting to pull a Joey Tribbiani on us (“I didn’t get the part. … Yeah I did!”), I very much appreciated Dimitrius’ beautiful stripped-down performance of Disclosure’s “Latch.” And I’m not the only one — Katy was so overcome with excitement by the end, she was literally screaming and jumping out of her chair like a mad woman.

ASHLEY HESS, 27 | Ditching her “safety net” piano was a big risk for Ashley, but it fully paid off in her performance of H.E.R.’s “Gone Away.” Standing under the spotlight without an instrument, she maintained a surprisingly firm command of the stage, and her voice sounded great, particularly in the song’s softer moments. I maintain that she’s a special one. 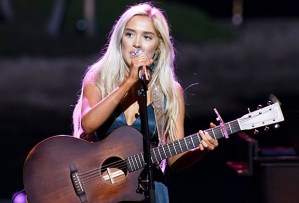 LACI KAYE BOOTH, 23 | I still get full-body chills just thinking about Laci’s raw, emotional rendition of “Georgia On My Mind,” a performance so natural, you’d believe she wrote the country classic herself.

WALKER BURROUGHS, 20 | There’s something really fun and fresh about Walker, all of which came through in his performance of 5 Seconds of Summer’s “Youngblood.” I understand why Lionel Richie told Walker that he needs to work on his — partially because he chose to play it safe and remain behind a piano this week — but he’s a star, and just like Walker’s mom, I won’t hear otherwise.

RYAN HAMMOND, 25 | Going with a boyfriend-approved classic, “Donny Hathaway’s “A Song For You,” turned out to be a very good decision for Ryan, whose charismatic and vocally impressive performance earned two emphatic “wow”s from the judges.

EVELYN CORMIER, 19 | Once again, Evelyn chose the perfect song (Alice Merton’s “No Roots”) to showcase her one-of-a-kind voice. She always goes to such interesting places in her performances, and you have no choice but to float right along with her.

KATE BARNETTE, 23 | It was impossible not to groove along to Kate’s fun, funky cover of Lorde’s “Royals.” Even Lionel recognized her greatness, declaring, “She brought the funk to the table.” 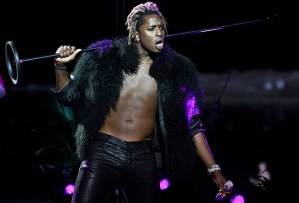 UCHE, 24 | “If you feel like you need to single a little better, just sing a little better.” Those words of wisdom from mentor Bobby Bones inspired Uché to deliver his best performance yet, a sensational (and surprisingly sensual) take on Wild Cherry’s “Play That Funky Music.” This was a completely different Uche than the one who half-performed Christina Aguilera’s “Ain’t No Other Man” in his original audition. I loved this Uche! From the fur vest and leather pants to the guitar-dance and crowd interaction, it was all working for me.

ALEJANDRO ARANDA, 24 | Only this guitar wizard could take one of the world’s cheesiest songs, Coldplay’s “Yellow,” and churn out a cover that was not only dairy free but highly downloadable. And that falsetto! Katy absolutely put it best: “He makes me want to make out with someone.”

JEREMIAH LLOYD HARMON, 26 | Just when I thought this gay preacher’s kid couldn’t break my heart any more, he opened his Showcase Round segment by reminding his parents that he loves them no matter what, then apologizes for disappointing them. (Seriously, when will technology advance to the point where you can hug someone through the TV?) The heartbreak continued with his performance of Fleetwood Mac’s “Landslide,” a song that once helped him relax after a particularly difficult conversation with his parents. He poured every ounce of his emotions into his performance, opting to forgo the piano and stand on his own.

RILEY THOMPSON, 16 | Despite being the youngest remaining competitor, Riley has arguably the strongest grasp of her identity. Her performance of Miranda Lambert’s “This Ain’t My Mama’s Broken Heart” was honestly incredible, and I’m not even a country person. (Am I crazy for thinking that Katy doesn’t particularly like her, though?)

RAQUEL TRINIDAD, 21 | Hoping to become “the first groovy American Idol [because] America deserves a hippie,” Raquel blessed us with a super funky performance of Hall & Oates’ “Rich Girl.” Happy 21st birthday to us all! 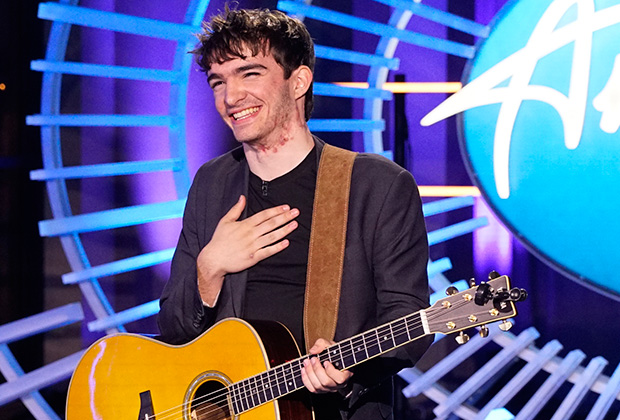 SHAWN ROBINSON, 22 | The world’s happiest hardware store worker effortlessly crushed Michael Jackson’s “Rock With You,” though I have to ask: This is a fine little number if you’re wasted at a wedding, but wouldn’t you expect MJ songs to be outlawed on singing competition shows by now?

BUMBLY, 27 | I have only wonderful things to say about the three seconds of Bumbly’s performance we were fortunate enough to witness this week. Well done, Bumbly.

WADE COTA, 27 | Completely overcome with emotion, Wade was already crying before he even started singing, but he managed to pull it together for a solid performance of Hozier’s “Work Song,” sending his signature growl across a sea of waving hands. I feel like I never know quite what I’m going to get when Wade steps up to the mic, and I’m rarely disappointed.

EDDIE ISLAND, 25 | Does anyone not love this guy? (“Flower power, bay-bay!”) He’s like a little one-man party when he performs, and I loved his unexpected take on “Don’t You Worry Child.” It wasn’t a song I would have expected from him, yet it really showcased his vocal flexibility. I’m a fan. 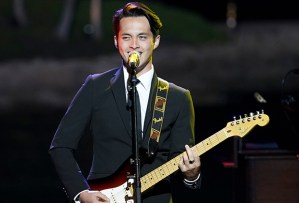 LAINE HARDY, 18 | I feel like the entire trajectory of the season shifted when Laine appeared on stage tonight and asked the audience, “Y’all ready to party with a Hardy?” Katy was freaking out over his suit before he even spoke (“Who the hell is that?!”), but once he uttered those seven fateful words, we were all part of it. And the fan love wasn’t totally without merit; though I don’t think Laine is the most impressive vocalist in the competition, he brings a lot of other qualities to the table, including Idol‘s top priority: marketability. (Also, did anyone else flash back to the Corey Clark/Paula Abdul escandalo when Katy asked, “Am I allowed to have a crush on a contestant?” Jeepers.)

OK, let’s discuss the Top 20: Which remaining contestants are you rooting for, and which eliminated singers deserved better? Drop all of your thoughts in a comment below.