If you thought Lena Luthor had trust issues before, just wait until you see how she recovers — or doesn’t — from the shock of learning that her loyal assistant has been anything but. Sunday’s episode of Supergirl, appropriately titled “All About Eve,” finds Lena teaming up with Alex and the Girl of Steel to investigate Ms. Teschmacher’s insidious connection to Lex.

“I missed working with Melissa [Benoist] and Chyler [Leigh],” Katie McGrath tells TVLine. “I missed the power you feel from having these very strong — yet slightly opposing — women coming together, putting everything aside to solve the problem at hand. They’ve all got very different strengths and skills, and it’s been a while since you’ve seen them all working together.”

Of course, the complicated (and ever-changing) relationships between the three characters made their scenes together “a bit confusing,” McGrath admits. “It’s like, ‘I know Kara is Supergirl, but Lena doesn’t know that. And now poor Chyler, on top of everything, has to add in, ‘Oh, I’ve lost my memory, so I also don’t know she is.’ All three of us just stood around trying to figure everything out.”

But McGrath isn’t complaining. In fact, she finds it “gratifying” that Alex has temporarily had her memory swiped. “I always get asked, ‘Lena’s so smart. How does she not know Kara is Supergirl?’ So now I get to say, ‘Look, if her sister can’t tell the difference, I think you should let up on poor Lena.'”

Below, McGrath discusses the many twists her character’s journey has taken as of late, including what the future may hold for Lena and James… 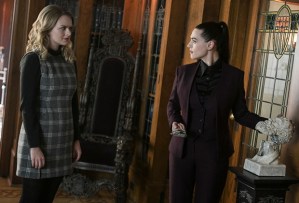 TVLINE | Let’s start with Eve. What was your reaction when you learned about her betrayal?
I was so unbelievably excited, because I love Andrea [Brooks]. She’s a spark of joy in my life and on set, and I was so completely gratified to see that they were taking her character and making it something integral. She’s such a huge part of the comics. You don’t really think about Lex without thinking about Teschmacher. She’s such an icon, and she so perfectly fit into the Supergirl story of strong, intelligent women. … If you think about it, they’ve been playing the long con for two years. I was like, “Man, you’ve really been setting this up for a while.” And Andrea plays it so wonderfully, so wide-eyed and innocent. When she turns, it’s heartbreaking, but so compelling.

TVLINE | It’s like Eve and Andrea have been playing the long con.
[Laughs] I swear to you, it’s making me question my friendship to her.

TVLINE | I imagine this will be a huge blow to Lena’s sense of security.
Oh, it’s massive. Lena has very deep-seated insecurities, which have to do with her trust issues. It takes her a long time to let her guard down and to let someone in, so to find out that someone she trusted so completely — in a way she’s never trusted anyone — is not only untrustworthy, but has been working with the one person who destroyed Lena in the past … I don’t think you’ve really seen the effects of what this has done to Lena as a human.

TVLINE | Is it bad that I’m excited to watch her fall apart?
You know, she’s always so composed and capable. Sometimes we forget that she’s one of the few human characters on the show. She doesn’t have special powers. She and Alex are the everywoman. Lena’s usually so smart and on top of things, you almost see her as a super, but to see her so frail will be very interesting. It’s going to be very dramatic to watch.

TVLINE | I’m also excited for the big Luthor family reunion we’ve been promised.
I haven’t had a scene with everyone together yet, but I will say that there is never a moment where I see Brenda’s name on a call sheet and don’t squeal with joy. She is the most elegant, most wonderful woman with the naughtiest sense of humor. She’s delicious and mischievous, and she brings such a gravitas to Lilian. For the past few episodes, I’ve just had scenes with her in prison scrubs, and she’s still the most beautiful, chilling, wonderful woman. I’m like, “How do you do this? We’re sitting at a table, and you’ve created a character that jumps off the screen.” Between that and Jon Cryer coming in, I feel like the Luthor family is absolutely spoiled with talent.

TVLINE | Speaking of Lex, we were all very curious to see what Cryer would bring to the role. As his scene partner, was there anything you found surprising about his take on the character?
We had quite a few scenes when we first started, but they were all of him with cancer. I was still really interested in what he was doing, but when we filmed the opening scene … he completely blew me away. I’d only seen one side of him when we were filming all the cancer stuff, so when I saw him playing the mad megalomaniac, I was like, “Oh, we are in for a treat.” He’s taken the idea of Lex from the comic book and really brought it to life. We are so lucky. Robert [Rovner] and Jessica [Queller] got it so right in casting him.

TVLINE | Switching gears, what can we expect coming up from Kara and Lena?
Lena’s going to have a difficult time coming to terms with the fact that she lied and betrayed her friendship with Kara to help Lex. It’s weighs on her very heavily, but it’s addressed coming up, so I don’t want to say too much.

TVLINE | How about Lena and James? Will she regret giving him the haranel?
For sure. She gave it to him not thinking it was going to give him powers. The man she loves, but ultimately realized she couldn’t be with, was dying. She didn’t fully understand what she was doing, but it was a Hail Mary. As the season goes on, you start to see the ramifications of that decision. I think she feels guilty that she made that choice for him, yet he’s the one who has to deal with it. She’s a strange Luthor, because she has such a huge moral compass. Any decision like this will weigh on her and affect her. The more you see Lex and Lilian, you see that the morality is uniquely Lena.

TVLINE | It’s not easy being the moral one in the family.
Tell me about it. Awful.

Your thoughts on Supergirl‘s latest twists? Drop ’em in a comment below?