DC Universe made a super amount of news Friday night at WonderCon, revealing a premiere date for its live-action Swamp Thing series, a first look at Stargirl‘s star-spangled hero, and a timetable for Titans‘ return.

Counting showrunner Geoff Johns among its EPs and based on characters from DC which Johns created, Stargirl follows high school sophomore Courtney Whitmore (played by Brec Bassinger) as she inspires an unlikely group of young heroes to stop the villains of the past. This new drama will reimagine Stargirl and the very first superhero team, the Justice Society of America, in an unpredictable series.

Stargirl’s super suit, seen in full below, was designed by Laura Jean Shannon, whose credits include Titans, Doom Patrol and Black Lightning, among others. The series is set to debut in early 2020. 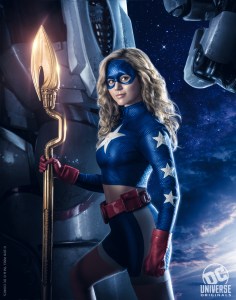 Coming much sooner to the digital subscription service is Swamp Thing, which will premiere Friday, May 31. That series follows Abby Arcane (Gotham’s Crystal Reed) as she investigates what seems to be a deadly swamp-born virus in a small town in Louisiana, only to discover that the swamp holds mystical and terrifying secrets.

DC Universe also announced that Titans Season 2 will arrive this fall, followed by the animated series Harley Quinn (who is voiced by The Big Bang Theory’s Kaley Cuoco).

Additionally, it was announced that Season 1 of Krypton will make its DC Universe debut on April 5, ahead of Season 2’s summer premiere on Syfy; the animated film Justice League vs. The Fatal Five will debut on April 16; and Young Justice: Outsiders will resume its season on July 2.