The Twilight Zone is one of the most innovative and influential shows in TV history, and anyone attempting to revive it has some mighty huge shoes to fill. But if you could handpick someone to produce a new Twilight Zone, wouldn’t you pick Jordan Peele? The former Key & Peele star has refashioned himself into a masterful horror auteur with Get Out and Us, and his Hitchcockian sense of the eerie and macabre makes him the perfect choice to lead CBS All Access’ The Twilight Zone (debuting Monday, April 1), which proves itself a worthy successor to the original while updating its familiar formula for the modern world we live in. 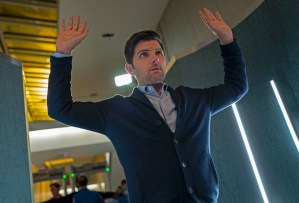 The Twilight Zone is a true anthology, with each episode telling a different story (Peele steps in for Rod Serling as host and narrator, as well as executive-producing), so the letter grade I’ve given it above is an average of the four episodes I’ve seen. I can highly recommend two of the four: “Nightmare at 30,000 Feet” — starring Adam Scott as an air traveler who is convinced his flight is doomed — revamps a classic Zone episode by cleverly playing on our post-9/11 paranoia; it’s a nail-bitingly intense ride with a wicked twist ending. “A Traveler” is the most genuinely surprising of the bunch, with Steven Yeun playing a mysterious stranger who visits a remote Alaska police station on Christmas Eve; it has a fascinatingly unsettling vibe and builds to a riveting finish. (The X-Files veteran Glen Morgan co-wrote the former and wrote the latter; let’s hope Peele just hands him the keys and lets him write every episode from here on out.)

Other installments, though, aren’t as successful. “The Comedian,” starring Kumail Nanjiani as a struggling stand-up comic who discovers a new way to get laughs, is a familiar devil’s-bargain tale that takes some interesting turns, but maybe not enough of them to fill its nearly hour-long running time. (The four episodes vary wildly in length, from 35 to 55 minutes, and some definitely drag on too long.) “Replay” is the weakest episode of the initial four: It takes a sci-fi conceit we’ve seen a lot of lately — Sanaa Lathan plays a mom who realizes her camcorder can actually rewind time — and saddles it with a heavy-handed message about the tension between cops and the black community. 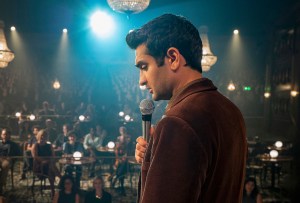 But even when the story falters, The Twilight Zone still serves as a fantastic acting showcase. Like American Horror Story, it allows big-name actors to try on a new role without committing to a full series, and Scott and Yeun, in particular, respond with Emmy-worthy work. Plus, there are fun Easter eggs planted throughout that hint at a shared universe across all the episodes. (Check out the magazine rack before Scott’s character boards the plane, for example.) Style-wise, it’s really a throwback to classic filmmaking, with an old-fashioned elegance to it; like the original Zone, it patiently lets its morality plays and ethical dilemmas unfold without tacking on too many narrative bells and whistles.

Peele’s Twilight Zone isn’t only competing with its predecessor, though. It’s also competing with Netflix’s Black Mirror, which stepped up a few years ago to revive the sci-fi anthology tradition that the original Zone started. No, the new Zone isn’t as mind-bendingly innovative as the best Black Mirror episodes — it’d be nice to see future installments break further away from the original template and blaze a new trail — but it’s gripping enough on its own terms. Based on the first batch of episodes, as uneven as they might be, The Twilight Zone has lots of potential… and with a genius like Peele at the helm, even the sky isn’t the limit.

THE TVLINE BOTTOM LINE: Though some episodes are better than others, Jordan Peele’s Twilight Zone revival is a worthy successor to the original, with riveting twists and top-notch performances.