RuPaul’s Drag Race welcomed Elvira, Mistress of the Dark on Thursday for a chilling challenge that separated the ghouls from the girls.

The drama began immediately this week, with Yvie Oddly basically asking Ra’Jah O’Hara — fresh off her lip sync victory against Mercedes Iman Diamond — why she hasn’t been stepping it up in the challenges. Ra’Jah brought up a valid point, that Yvie was literally wearing trash, but Yvie brushed off the hate, telling Ra’Jah that she only got defensive because she knew the truth. Perhaps this lit a fire under Miss O’Hara, because she crushed this week’s mini challenge, which transformed the queens into living dolls. (Personally, I’d like a Vanessa Vanjie Mateo doll of my own.) 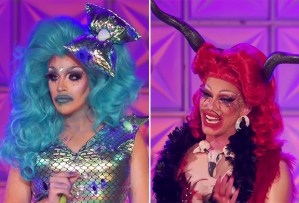 As the lyrics to Whitney Houston’s “I’m Your Baby Tonight” command, both queens were ready to give Ru everything — even if that included Ariel taking an awkward, multi-replayed tumble. She clearly hoped that a last-minute backbend would save her, but alas, she’s no Naomi Smalls. Back to the sea with you, Ariel!

* I did not see that Vanjie/Brooke Lynn relationship coming, but I am here for it. Let’s just hope it doesn’t cause issues down the road, as Vanjie made it clear this week that no trade is coming between her and the crown.

* I wasn’t quite as into the Silky/Nina West kiss we got this week, but it’s fun to see a group of queens getting along for a change. Certain seasons have been a little toxic, so it’s nice to see some workroom levity.

Was the right queen sent home this week? Cast your vote below, then drop a comment with your thoughts on the episode.