Still in awe of Jane the Virgin star Gina Rodriguez‘s seven-minute monologue during the fifth and final season premiere on Wednesday? How could you not be?! After all, the actress’ soliloquy ran the gamut from emotional to funny and, at one point, was delivered sans pants, only adding to the heartbreaking absurdity of Jane’s “My dead husband is back with no memory” predicament. On top of that, Rodriguez directed the monologue, which was filmed as a single shot as Jane made her way around the house. (Relive the epic moment in the above video.)

Upon first learning of the wordy sequence from showrunner Jennie Snyder Urman, Rodriguez said that she was more than up to the task. “I can definitely memorize a monologue. I went to theater school. I can memorize an entire play,” the actress said at the Television Critics Association winter press tour in January. “I was like, ‘All right, Jennie! Let’s do this!'”

Then the actress found out that she would also be directing the season opener. “It was like, ‘OK. That’s going to be interesting,'” Rodriguez continued. “And then [Jennie] was like, ‘Let’s do it in a oner.’ And I was like, ‘Even better! Come on!’ So it was figuring out the choreography. It was figuring out the beats, making sure I was hitting everything, tonally, that Jennie wanted me to hit, as well as making sure that it all flowed organically, and you were able to see my mom and my grandmother at the same time, [and] at the same time stay with me and move with me… So it was a really great challenge.” 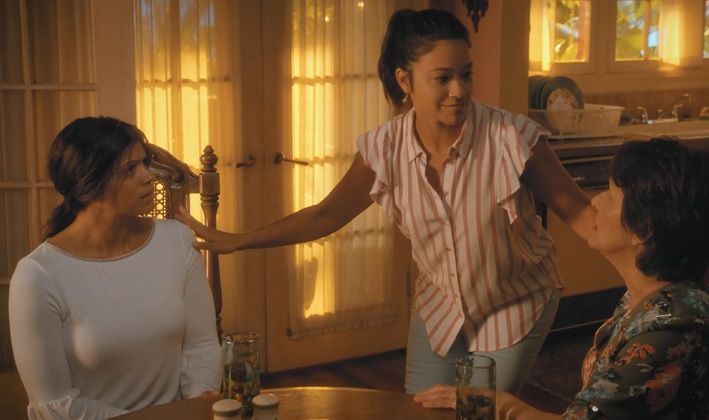 In the end, it only took five takes to nail the lengthy shot. “It’s a great dance between Gina and Rory [Robert Knepp], who did the steadicam, because they were so in sync,” Urman said. “But we could have put any one of the takes on TV. We were just choosing. It felt like I had an abundance of riches, because she gave us something different in each one.”

Before the series even filmed this week’s premiere, Rodriguez set the tone for the season, arriving to the table read with the dialogue already in her head. (TVLine was there and witnessed the actress impressively deliver all seven pages of Jane’s thoughts, sans script, to thunderous applause.) “[Executive producer/director] Brad Silberling said he would give me a hundred bucks if I came memorized,” Rodriguez explained after the table read. “I would say it took me about an hour-and-a-half. I did it like twice to [fiancé] Joe [LoCicero], and then I did it once on the drive here by myself, and then I kind of did it walking around.”

Rodriguez took on the table-read challenge for the easy money, she joked, but also because she “wanted to set a precedent for this year. We always come really ready to do good art, and we’re really excited [about] making good art, and we’ve been given this opportunity, so we’re not going to take it for granted,” she explained. “I wanted all of the actors to see that I will embody that, whether they want to join me or not. I will bring everything I possibly can to this last year, because God forbid I never get this chance again.”

Were you wowed by Jane’s monologue? Hit the comments with your raves, and check out our premiere post mortem with Urman here.