Abbi and Ilana said goodbye to Broad City — and each other — in an unexpectedly emotional series finale… but did they say goodbye for good?

Thursday’s finale opens with Ilana rushing Abbi out the door (“No bra, save time!”) to get one more bacon egg and cheese sandwich on Abbi’s last day in New York, before she moves to Boulder for an arts residency. But their favorite bodega has vanished, and the next best option refuses to sell breakfast after 11, even when the ladies try to lay on the charm. (When the bodega guy won’t budge, Ilana screams at him and Abbi dropkicks a bag of potato chips.) But Ilana’s not just mad about breakfast; she still can’t fathom why Abbi would want to leave New York for Boulder. (“What’s the culture there? Rocks?”) So when Ilana spots a Japanese smart toilet abandoned on the sidewalk and declares it their mission for the day — pointedly telling Abbi, “I need this” — Abbi reluctantly agrees to help her lug it across the Brooklyn Bridge.

On the bridge, toilet in hand, Abbi and Ilana agree to keep their legendary brainstorming sessions going, even while they’re in different cities — Ilana wants to sell vials of “Doritos dust… for spicing, or for swigging” — and agree to meet at the St. Louis arch in case of a world-flattening apocalypse. (It’s halfway between New York and Boulder, you see.) But things get teary when Abbi confesses she’s “really scared” about what lies ahead and Ilana assures her, “We’re both gonna be better for it.” She gets choked up as she tells Abbi she’s been “the most beautiful, deep, real, cool and hot, meaningful, important relationship of my life”; in fact, she gets so emotional, she doesn’t even want to go to dinner like they planned, because she doesn’t want to say goodbye again. She runs off and leaves Abbi standing alone on the bridge… and their toilet got stolen, anyway. 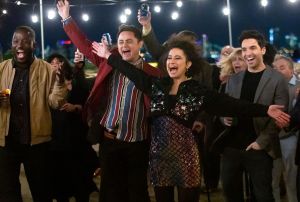 Abbi spends her last night in New York by herself, eating pizza in sweats and wearing a minty green face mask, when Bevers calls her up to the roof, saying he burned himself badly sunbathing nude. But really, it’s a surprise party for Abbi, with Lincoln, Trey and Jaime in attendance. (No Jeremy?!) Abbi quickly changes, and graciously accepts Trey’s goodbye gift of a huge stack of free weights. (“Promise me you’ll eat for your blood type, OK?”) She says quick goodbyes to Lincoln, Jaime and Bevers, too, before Ilana rushes them all out the door… so she and Abbi can spend the rest of the evening together.

Back in Abbi’s empty apartment, she records video of Ilana gossiping about beloved icons like Walt Disney and the Kennedys to save for when she’s homesick. Then, while Ilana’s asleep, Abbi tries to sneak out (leaving behind her iconic blue dress and a Post-It that says, “I love you, Ilana”) and hop in a cab to the airport. But Ilana catches her, and brings her one last gift: an apocalypse-ready go bag, complete with gas mask. They gush over each other — Abbi: “You’re, like, the smartest person I know.” Ilana: “I’m, like, the only person you know” — and shed a lot of tears, stopping only to yell at the cabbie when he tells them to hurry up. Abbi finally gets in the cab and drives off, and Ilana waves goodbye… before realizing she locked herself out.

But wait! There’s more! We flash-forward to four months later, when Ilana giggles at the sight of a hairless cat in the park and texts a photo to Abbi. They chat about nothing in particular — they talk several times a day, of course — before Abbi heads into the studio with the lush Colorado landscape behind her, and Ilana heads down into the subway. And as she does, a new pair of friends walks up the stairs, chatting about nothing in particular, and then another pair, and then another… and their voices of youthful exuberance combine to form the sound of the city. (I kinda wanted to see Abbi and Ilana meet at that arch, though.)

What’d you think of Abbi and Ilana’s farewell? Grade the finale in our poll, and then hit the comments with your post-finale thoughts.