NBC on Thursday opened a tab at Abby’s, a new multi-camera comedy from executive producer Mike Schur that is shot before a live, outdoor audience. Will you be back for another round, or did you tune out before last call?

Natalie Morales (whose myriad credits include beloved one-and-dones The Grinder, The Middleman and Trophy Wife) plays the title character, a former marine sergeant who runs an illegal bar out of the house she’s been renting in San Diego, Calif. The makeshift establishment is populated by her many neighbors, including a select group of regulars who have abided by the bar’s 162 (!) rules and regulations and earned themselves a permanent seat at the counter. Among them are Fred (Scrubs‘ Neil Flynn), the “Cal Ripken of low-grade alcoholism” who knows Abby through her degenerate father, and Beth (Search Party‘s Jessica Chaffin), a stressed-out mom who lives next door. Rounding out the group are Abby’s’ bouncer James and bar manager Rosie (relative newcomers Leonard Ouzts and Kimia Behpoornia).

One night, Abby’s new landlord Bill (New Girl‘s Nelson Franklin) drops by unexpectedly. He has just inherited the property from his recently deceased aunt and is shocked to discover the backyard operation, which he demands be shut down immediately. Abby tries to reason with Bill, but the uptight proprietor doesn’t want to be liable if the uninsured venture goes south. 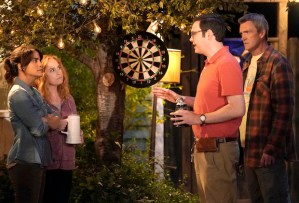 Bill eventually has a change of heart. Beth, Fred, et al. allow him to take a seat at the bar, where he opens up about his bitter divorce and acknowledges how nice it’d be to have a place to go  now that his ex-wife has claimed all of his favorite spots. Abby is initially reluctant to partner with Bill and bring the business up to code, but Fred convinces her that she can trust the guy not to ruin the joint.

What did you think of the Abby’s premiere? Log your choices in the polls below!