This time around, the designers were given more freedom than ever, challenged with creating a six-look collection in four days with a budget of $3,000. “The specific theme can be whatever you want,” host Alyssa Milano revealed, which seemed to please everyone. Let’s see how this all panned out… 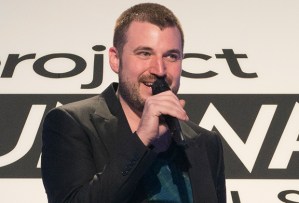 EVAN | For his collection, Evan was inspired by the feelings of paranoia and entitlement he experienced during the competition, ultimately landing on the concept of conspiracy theories. And because there’s (apparently) no greater conspiracy theory than the Queen of England secretly being a reptile, Evan settled on a “regal meets reptilian” theme. (Come to think of it, that would also work as a really crazy prom theme. Teens, if you’re reading this, do your thing!) With Christina Exie as his right-hand woman, the “pacemaking, show-stopping drama king from Toronto” combined his street style with an aggressive elegance for a truly one-of-a-kind collection.

The judges clearly struggled to wrap their heads around Evan’s overall concept, but they appreciated his point of view. “If we were to pick based on things we’ve never seen before, you would win,” Isaac Mizrahi told him. (Based on Evan’s reaction, I think he took that comment as more of a compliment than it was.) 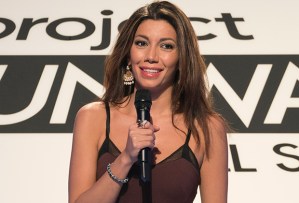 IRINA | Drawing inspiration from Picasso, cubism, and “deconstructing shapes into pure geometry,” Irina (along with assistant Mondo Guerra) set out to create a 3-D sculptural collection that channels “fearless femininity and the strength of the modern woman.” And like all high-concept experiments, this one came with its share of unpredictable roadblocks, like Irina spending an entire day just cutting out shapes, unsure of how she would even piece them together. “It’s a brand new concept, and I don’t know how it’s going to pan out,” she admitted.

For the most part, Irina’s risks paid off in spades. “You did an incredible job,” Isaac told her. “You really got this woman down.” Georgina Chapman didn’t love the felted wool — she thought the most successful pieces were made using more fragile fabric — but she found the overall collection to be “emotional” and “extraordinary.” 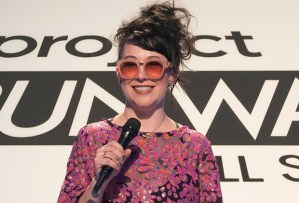 MICHELLE | Neil Young’s “Harvest Moon” served as the basis for Michelle’s peachy throwback collection, which she instantly named “Harvest Mood.” More than any of her fellow designers, she seemed to have an immediate idea of what she wanted to create, so she was thrilled to get like-minded Sean Kelly as her assistant. Her end result was a “baroque-inspired romance novel that starts off really nice… and ends really naughty.”

The judges couldn’t have been more thrilled with Michelle’s finished products. Isaac referred to the first and last dress as “pillars of beauty,” calling one of their sleeves “the greatest thing in the world.” (You hear that? “In the world.”) Georgina, meanwhile, appreciated the humor of it all, adding that it couldn’t have been done by anyone else: “I think you hit it out of the park.” 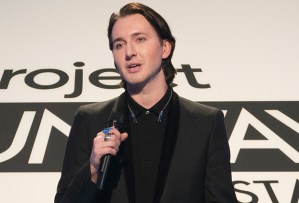 DMITRY | I have a lot of questions about the inspiration for Dmitry’s collection, my first being: What exactly was it? He started by mentioning his love of “shapes and forms” from when he was just six years old, then described it as a reflection of his “personal journey as an artist and as a human being.” Even after the contestants were encouraged to be specific and to give a real sense of their aesthetic, Dmitry remained surprisingly vague. “This is very personal for me,” he later told the judges, fighting back tears. “I really looked into myself.”

Repeating the word “personal” ad nauseam doesn’t necessarily make something personal, and I just didn’t get it. That said, his ambitious collection was stunning. Words like “beautiful” and “masterful” were used to describe his pieces, with the judges going especially wild over the witty cut-outs.

RESULTS | Following the judges’ final deliberation, the designers returned to the stage to learn their fates. Evan was the first to be eliminated, making him the season’s fourth-place contestant, followed shortly after by Irina in third. This left just Michelle and Dmitry in the running for the title of “world champion,” and even the judges seemed surprised by their decision: The winner of Project Runway All Stars Season 7 is… Michelle!

“I’ve never felt this emotionally exhausted in my life,” she admitted. Dmitry, meanwhile, had less kind words: “I love Michelle, but you can’t compare [my collection with] what Michelle put out there. Not technically, not creatively. My pieces were masterpieces.”

Were you surprised to see Michelle named Project Runway‘s first-ever “World Champion”? Drop a comment with your thoughts on this season’s All Stars winner below.