Noooo, queens: Whether we like it or not, Broad City is ending its five-season run this Thursday (Comedy Central, 10/9c) — and if you’re already getting emotional thinking about saying goodbye to Abbi and Ilana, just think how emotional they’re going to be.

We know that Abbi is headed to Colorado to pursue her art career, leaving best friend Ilana behind in New York City, so Thursday’s finale will feature an on-screen goodbye as well. And according to stars Abbi Jacobson and Ilana Glazer, shooting the series finale was just as emotional off-camera. “We’ve been working with a lot of people on our crew for the entire series, so it was extremely bittersweet,” Jacobson tells TVLine. But also, “everybody involved was so proud of the show and the way we were ending it, so it was very celebratory.” 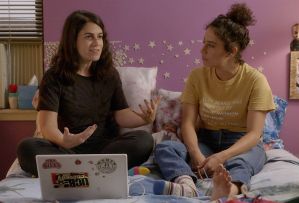 The final scene of the series was actually shot last, Jacobson reveals, to take advantage of the poignant atmosphere on set: “Usually we block shoot, and it was a little tricky, but we shot it last… It was appropriate: The way we were feeling was equivalent to the way the characters were feeling.” But it still hasn’t really hit her and Glazer yet that the Broad City era is ending, she adds: “I think it won’t be until the show has finished airing and we start writing again that it’ll kick in feeling like it’s actually over.”

Broad City‘s ending marks a new beginning for Jacobson and Glazer: They’ve signed a development deal with Comedy Central, and already have three new shows in the works as executive producers. “We’ve really earned ourselves space to make our own stuff, and we’re really excited to occupy that space,” Glazer says. But they don’t plan to star in any of those projects. “For right now, I think we have to take a break” from acting together, Jacobson says, “just because we are so associated with these two characters.”

That doesn’t mean we can’t hold out hope for an on-screen reunion someday, though. “I can’t imagine a world in which we don’t ever act together again,” Jacobson shares. “That’s the saddest part for me of ending the show, not getting to act opposite Ilana as them. It’s so fun.”