This wasn’t a great week to be a vampire on Shadowhunters. Or a werewolf. Or a warlock, for that matter. Basically, no one is in a great place at this point.

Monday’s episode began with Heidi inciting a well-dressed vampire revolution. “It’s a new world,” she told her fellow bloodsuckers, none of whom were aware that she was already actively plotting to sell them out to the Shadowhunters. Giving Alec the names of the vampires who attacked the Jade Wolf was a two-pronged plan: Not only did it earn her a clean slate with the good guys, but it sowed additional seeds of discord within the vampire community — and as we all know, chaos is Heidi’s favorite.

Maia was understandably less than thrilled by this turn of events, since Jordan already told her that Heidi orchestrated the assault, so she decided to unleash her own brand of justice. After injecting herself with holy water — which is harmless to werewolves, yet poisonous to vampires — she tricked Heidi into feeding on her, then celebrated as the wannabe villain literally disintegrated.

At this point, Maia probably could have used a stiff drink. Instead, she got a lecture from Simon, who felt that she took things too far with Heidi. “We could have done this the right way,” he said. “Killing her wasn’t right. There’s a system for a reason, and if we keep breaking the rules, what makes us better than her?” (I’m sorry, what did he expect Maia to do, let Heidi kill her? That girl has been a loose cannon from Day 1, and I applaud Maia for taking her out.) 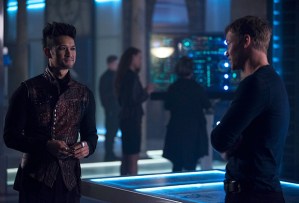 * Magnus’ experience living at the Institute proved even more uncomfortable than he feared, down to awkwardly navigating the dining hall for a place to sit. (There’s always room at the cool kids’ table!) He also didn’t appreciate Alec airing their dirty laundry around other Shadowhotties like Underhill. But rather than allow the tension to bubble up any higher, Alec proposed a romantic solution: that he and Magnus find a place of their own to live in. Like, together! It was a huge moment for the fan-favorite couple, and even though it ended with Magnus getting a magical bloody nose and passing out on the floor, I’m choosing to take this as a win.

* Clary got real familiar with Aline Penhallow during an impromptu training session, but I wouldn’t plan on the two becoming besties. During a follow-up chat with Jace, Aline made it clear that she doesn’t trust Clary and is worried about her connection to Jonathan — a fear Jace likely shares after walking in on his girlfriend attempting to burn her hand in the fireplace.

* Izzy and Raphael finally reunited, though not under the best of circumstances. She took it upon herself to bring him into custody, something he’d been anticipating for a while. (Raphael is all about atoning for his sins these days.) “I just want you to know that I’ll always care about you,” he told her when they parted. “I’ll always care about you, too,” she replied. “Goodbye, Raphael.” (Sad!)

Your thoughts on Heidi’s long-overdue demise? Magnus’ new struggle? Clary’s budding darkness? Whatever’s on your mind, drop it in a comment below.