If you were hoping that Monday’s 9-1-1 would reveal whether Chimney survived last week’s encounter with Maddie’s ex, believe me, I feel your frustration. Still, the emotional hour — which flashed back to 2005 for the story of how Chimney joined the force — was an eye-opening experience, and whether Chimney lives or dies next week, we’ll surely never think of him the same way.

Below, Kenneth Choi breaks down the biggest moments from this week’s Chimney-centric episode, including how the loss of his friend shaped his journey, and what the future may hold (fingers crossed!) for his relationship with Maddie:

TVLINE | Were you told about Chimney’s stabbing ahead of time, or did you learn about it from the script?
I actually wasn’t told about it ahead of time. I had my fingers crossed, maybe a few beads of sweat running down my neck. After they put that bar into his head, I figured he was safe. But after they said he was going to be stabbed three times, I didn’t have much hope for him. 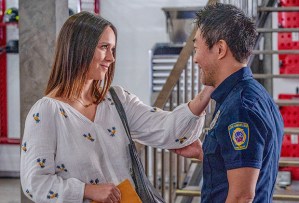 TVLINE | Assuming he survives, what do you hope we’ll see from his relationship with Maddie?
I think he deserves a real shot at happiness — again, if he survives — and I think Maddie is the perfect partner for him. I’d like to think they could move forward if he survives, but we’ll see.

TVLINE | I’m just glad she ended up with Chimney. I figured the show would put her with Ryan Guzman’s character.
Oh, believe me, everybody thought [Eddie] would end up with [Maddie]. I found out that it was Jennifer who suggested to Tim Minear that Maddie have a relationship with Chimney. I asked her why, and just thought it was a more interesting choice, which it was. It’s the not-obvious choice, so we’ll see what happens. Hey, we don’t even know if Maddie’s safe!

TVLINE | This might just be me, but I feel like getting stabbed was the best thing that could have happened to Chimney. He got a whole episode out of it!
That’s right! Now I have my origin story.

TVLINE | Was it at all daunting to carry an entire episode on your shoulders?
No, I’ve been wanting it all season. I’ve been wanting an opportunity to take the ball and run with it. Most of the time when you’re a supporting character, they’ll give you a storyline in an episode with four or five other storylines. Sometimes they throw you a bone and give you the main storyline. But these origin episodes are great because it’s all me. I think Angela [Bassett] is in it for one scene, but the rest I get to carry. They gave me a lot of heavy lifting, but I was ready for it. That’s all you want as an actor.

TVLINE | On a show like this, I feel like even the “supporting” characters could lead their own spinoffs.
I remember when the “Hen Begins” episodes came out, everybody [in the cast] saw it and hoped they’d all get to do their own origin stories. So I was pleased that I got mine when I did — perfect timing with the stabbing and all that. 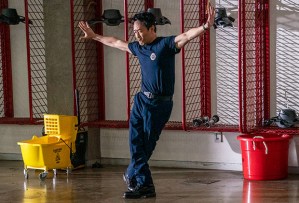 TVLINE | The audience now knows a lot more about Chimney, but do you feel that you also gained a better understanding of your character through this episode?
Absolutely. Jen Lynch — who directed the episode, and also directed “Hen Begins,” and will also be directing the Bobby origin story — gave me a lot of insight. She kept drilling in the notion that Chimney is all about joy. He overcomes with joy. He’s joyful. And that informed my performance quite a bit, because I’d kind of forgotten that as the episodes went on, and she reminded me of that fact.

TVLINE | Dumb question: Was that really you singing?
Yes, it is. Me and probably some autotune. Probably a lot of autotune, actually.

TVLINE | I mean, I don’t know why you’re doing the acting thing when your calling is clearly to be a country music singer.
[Laughs] Get out of here. I was petrified when I did it. If I ever sing at karaoke, I have to be six or seven beers deep, and I did this without any, so it was very nerve-wracking. I did one other karaoke scene, but [Jennifer Love Hewitt] carried me through that one. This I had to do on my own.

TVLINE | I was very sad to learn that Chimney’s dad doesn’t appreciate what he’s doing with his life. Is there any hope of that changing in the future, assuming he lives?
I’d like to hope so. That storyline actually parallels my own personal storyline. I had a situation with my own father, where he didn’t really understand what the acting business was. He thought it was a dead end career, and it took a few years for him to actually come around. Now that he has, our relationship has grown substantially, and I wish the same for Chimney.

TVLINE | Chimney’s relationship with Kevin played a huge role in his origin story. How do you feel about what Kevin contributed, and how his death affected Chimney?
I loved it, because it strengthens the bond Chimney has with Kevin’s parents, who are like Chimney’s surrogate parents. James Chen, who played Kevin, is fantastic. I known James, and I thought he brought a lot of heart to this character, a lot of love. Chimney seems to be the heart of the firefighters, and Kevin is the heart of this episode. It was good to lean on him during scenes. We had a lot of emotional stuff. And the actors who play Kevin’s parents [Kelvin Han Yee and Freda Foh Shen] — all I had to do was look at them and react.

TVLINE | I have to say, I was not thrilled to see Captain Gerard again.
[Laughs] I happen to love that actor [Brian Thompson] from way back when he played Night Slasher in Cobra. I was always terrified of him, and I was still terrified when I met him during “Hen Begins” until I started talking to him. He’s very intelligent, well-read, soft-spoken and has a big, generous heart. It’s a testament to what a great actor he is that he can be so intimidating as that conventional drill sergeant beast.

Your thoughts on 9-1-1‘s big Chimney episode? Drop ’em in a comment below.