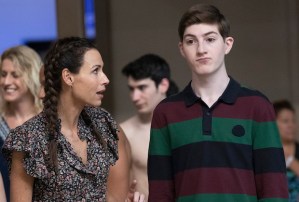 THE CASE FOR KEEPING | Without ever shying away from the additional challenges faced by college-bound JJ (Micah Fowler), Season 3 of the family comedy has allowed the DiMeos’ special-needs son to spread his wings, whether he’s wound up soaring (as when he and aide Kenneth made coffee as well as a mess) or plummeting (literally, into a ditch, at a Halloween rave in the woods). It’s also done a beautiful job of portraying the anxiety, awkwardness and excitement of the teen’s first romance.

At the same time, the show has sprung Maya (the sublime Minnie Driver) from overprotective-mom mode — at least a bit — by setting her up in business with another special-needs mom (Sarah Chalke, the most welcome of guest stars). And virtually any scene that includes Mason Cook as nerdy middle child Ray is a gem.

THE CASE FOR CUTTING | Speechless is pretty consistently funny, but its ratings are no laughing matter. Averaging not quite a 0.5 in the demo and just 2.3 million total viewers, the sitcom ranks dead last among all scripted ABC series — and only bests the Friday game show Child Support and the DOA Alec Baldwin Show if you fold in unscripted fare. What’s more, with JJ hoping to attend college in New York, the series is fast approaching what could be a fine, natural stopping point.

Vote below, then state your own case for keeping or cutting Speechless.