Does Amazon have a drama series problem? I’m beginning to think it might, after watching the first three episodes of Hanna (debuting Friday, March 29), a competently made thriller that fails to strike any kind of emotional chord. It has plenty of car chases, gunfire and fistfights, to be sure, but precious little character development or storytelling depth. And unfortunately, that’s starting to become a pattern for the streamer — one that’s holding it back from truly competing with Netflix and Hulu. 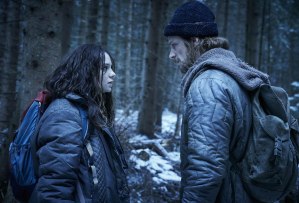 A reworking of the 2011 film starring Saoirse Ronan, Hanna stars Joel Kinnaman (The Killing, House of Cards) as Erik, a mercenary who steals a baby from a top-secret facility and raises her in the snowy woods of eastern Europe. (They live in quite a spacious, well-appointed cave, actually.) Played as a teen by newcomer Esmé Creed-Miles, Hanna grows up to be a lean, mean killing machine, battering poor defenseless trees with her fists and trained to use lethal force by dear old Dad. She longs to “know what’s beyond the forest,” though, and she unwittingly gets her wish when a raid separates her from her father, leaving her to explore a big, scary world all on her own.

Boiled down to its essential elements, Hanna is a bland fish-out-of water tale punctuated by short bursts of sudden violence. Yes, the action scenes are appropriately tense and dynamic, but once the action stopped, my attention span plummeted. The scripts from creator David Farr, who also co-wrote the 2011 movie, turn dull and moody when people aren’t trying to kill each other. The dialogue is terse and utilitarian, strictly designed to move the action from one scene to the next, and the supporting characters are generic to the point of being forgettable. (Plus, it’s never adequately explained why so many characters in various European countries from all walks of life speak perfect English.) 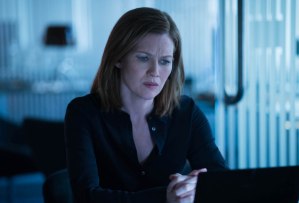 As Hanna, Creed-Miles does have a certain fire in her eyes and looks convincing enough beating up guys twice her size, but it’s a lot to ask a young actress like her to carry the bulk of the series, especially when the role — and every role here, really — is so underwritten. Kinnaman’s The Killing co-star Mireille Enos joins him here as CIA operative Marissa Wiegler, who’s been chasing after Erik and Hanna for years; she and Kinnaman are accomplished actors who probably lend this story more gravitas than it deserves, but even they fail to find a steady heartbeat in the thick tangle of shoot-’em-ups and conspiracy theories they’ve been given.

This really goes beyond just one show, though; it’s a network-wide epidemic at Amazon. Hanna actually fits in perfectly right next to dramas like The Man in the High Castle and Tom Clancy’s Jack Ryan: solid premise and action scenes, zero character or emotion. Amazon is always happy to throw lots of money on the screen, and Hanna travels to many sumptuous international locales, while teasing us with a number of murky conspiracies meant to keep us guessing… but it never gives us a compelling reason to care about any of it.

Amazon has done pretty well on the comedy side — shows like The Marvelous Mrs. Maisel and Transparent have won both loyal followings and major awards — but it needs to tweak its drama strategy quickly, and try to find a spark of creativity to replace the by-the-numbers thrillers it’s been churning out. As it stands, it’s still searching for its signature drama, and losing serious ground to Netflix and Hulu, who’ve already found distinct dramas like Stranger Things and The Handmaid’s Tale to lead their programming slates… and the disappointingly hollow Hanna won’t do much to help Amazon catch up.

THE TVLINE BOTTOM LINE: Amazon’s international thriller Hanna offers lots of shoot-’em-up action scenes, but never gives us a reason to care about any of it.