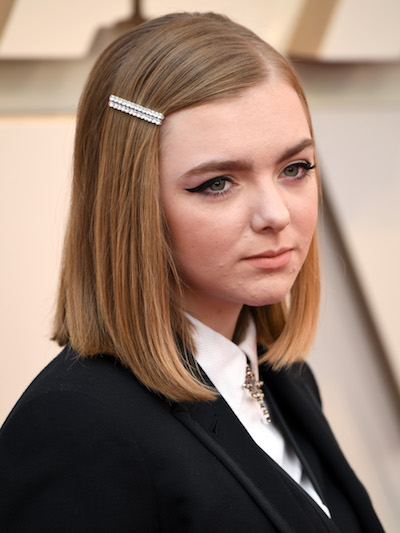 Set in the titular (but fictional) town where King has based many of his published works, Castle Rock weaves together different locations and characters from the author’s greatest hits. Per the official Season 2 logline, “A feud between warring clans comes to a boil when Annie Wilkes, King’s nurse from hell, gets waylaid in Castle Rock.”

It goes without saying that Caplan has big shoes to fill.  Misery‘s Annie — featured in King’s 1987 novel of the same name — gained icon status when Kathy Bates portrayed her in the 1990 film adaptation. The portrayal netted her an Oscar. For Fisher, the role of Annie’s home-schooled daughter arrives in the wake of her breakout success in Eighth Grade.

Meanwhile, Robbins — arguably best known for his starring role in 1994’s Shawshank Redemption, which was based on King’s 1982 novella Rita Hayworth and Shawshank Redemption — will inhabit another notable King subject: Reginald “Pop” Merrill (from King’s 1990 novella The Sun Dog). The Patriarch of the Merrill crime family, Pop is dying of cancer and at a reckoning with his family. Hedlund co-stars as Pop’s nephew John “Ace” Merrill, who is taking over his uncle’s businesses and threatening a fragile peace with nearby Jerusalem’s Lot.