All American has thrown so much family angst into the mix as of late, we almost forgot that this show is primarily about football. (Seriously, did the playoffs even happen?)

But in Wednesday’s season finale, the CW drama got all clear-eyes-full-hearts on us once again, returning to the gridiron as Spencer James chased a state championship title. And given the many rocky relationships scattered through the halls of Beverly High, there was plenty of finale drama off the field, as well.

Before you tell us what you thought of the season ender, let’s recap what went down:

* Beverly High is facing off against Spencer’s former school, South Crenshaw High, in the championship game, which leaves Spencer massively conflicted. Sure, he wants to win the title — but doing so would mean devastating Crenshaw and robbing his old neighborhood of a rare moment of happiness. Once the game gets underway, Coach Baker can immediately see that Spencer is pushing himself too hard, and he worries that Spencer is playing recklessly.

It turns out that Coach is right to worry: Moments later, during a play, Spencer brutally tackles his Crenshaw buddy Chris, leaving the teenager immobile on the grass for a few moments. Spencer panics after realizing he may have paralyzed his friend — and even after Chris begins to regain feeling in his legs (whew!), Spencer is so overwhelmed, he nearly quits the whole game. But Spencer’s father visits him in the locker room and gives him one heck of a pep talk, urging Spencer to get back out on the field and play the game he’s loved since childhood, regardless of teams or scores.

Spencer takes Corey’s words to heart and, after convincing Coach Baker to let him back in the game, he ultimately makes the tie-breaking, game-winning play, earning Beverly High its long-awaited championship. (Spencer’s mad dash to the end zone is even interspersed with flashbacks to his Pee Wee games, in case your heartstrings needed an extra tug.) 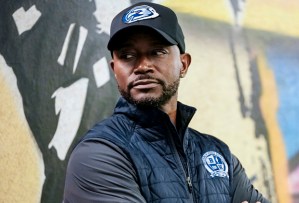 * Following Beverly High’s triumph, Jordan visits his dad in his office and lays into the man, calling the championship a “fake victory” since Coach Baker cheated his way to the top. Coach Baker assures Jordan that he already knows how badly he’s messed up his own life, both personally and professionally. He ultimately leaves a letter of resignation on his desk at Beverly High, then decides to temporarily move in with his father, Willy, in order to give Laura and the kids some space.

* Olivia essentially breaks up with Layla — or whatever the friendship equivalent of a break-up is — after telling Layla that their BFF status takes too much work to maintain. Later, though, Layla has a bit of a breakdown at her house, sobbing as she breaks and destroys nearly everything in her swanky pad. Olivia pays Layla a visit and finds the house in shambles, then comforts her friend as she cries. (In other, unrelated Olivia news: Asher is totally into her.)

* With the help of Laura Baker and several cops from the Los Angeles Police Department, Coop sets up Tyrone and finally gets him arrested, thus ending Coop’s involvement with Crenshaw’s gangs at last.

* Spencer’s father opts to stick around Crenshaw a while longer. In fact, he’s planning to take over as head coach of the South Crenshaw High football team — and he wants Spencer to move back home and play for him instead of Beverly High. Spencer seems conflicted by the offer, and Corey assures his son that he doesn’t need to make a decision right away.

Then, a few moments later, Corey and Grace do some catching up of their own, and Corey asks his ex-wife something he’s been wanting to know for years: Is Spencer’s younger brother, Dillon, actually Corey’s child? Or is Dillon a product of Grace’s affair, making Coach Baker his real father? Grace doesn’t reply to that doozy of a question — and the rest of us are left hoping for a Season 2 renewal.

That’s a wrap on Season 1! What did you think of All American‘s finale? Grade the episode in our poll below, then drop a comment with your full reviews!