The next chapter in the Pretty Little Liars saga begins Wednesday (Freeform, 8/7c) with the series premiere of The Perfectionists, leaving just one mAjor question on the table: Are you ready for it? More specifically, do you remember enough from the original series’ 160-episode run to fully appreciate the spinoff?

As it turns out, there isn’t a whole lot of information you need to have handy, save for the basics on Alison DiLaurentis (Sasha Pieterse) and Mona Vanderwaal (Janel Parrish), the two characters relocating from PLL‘s Rosewood to The Perfectionists‘ Beacon Heights. Ready? Let’s do this…

1. Alison and Mona are unstoppable badasses | Like a pair of gorgeous cockroaches, these two women spent seven years surviving anything thrown their way. They’ve both been presumed dead, they’ve both slapped each other in a church and they’ve never hesitated to take exactly what they want. In summary, underestimating either of these manipulative savages would be a big mistake.

2. Mona is also a tech genius | She may not always say the right thing, but technology is a language in which Mona has always been fluent. Without giving too much away, Mona’s technological inclinations will come in handy as she faces a new omniscient enemy in the world of the Perfectionists. 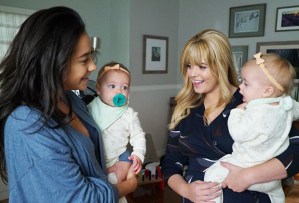 3. Alison is a mother of two | In PLL‘s final season, Alison was unknowingly impregnated using the stolen eggs of her then-friend Emily Fields and the donated sperm of secret villain Wren Kingston. During her pregnancy, Alison came to terms with her romantic feelings for Emily, ultimately proposing after welcoming their daughters — Grace and Lily — into the world. At the end of the series, Alison and Emily were raising their twins together in Rosewood.

4. Alison has been hurt before | If you’re waiting for Alison to jump into a new relationship on The Perfectionists, I wouldn’t hold your breath. Not only is Ali still harboring undisclosed feelings for her baby mama, but her relationship history is nothing short of gnarly. Heck, after being married to a murderous psychopath like Archer Dunhill, I’m surprised she wanted to propose to anyone. 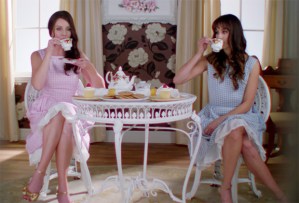 5. Mona is currently holding two women captive in Paris | The penultimate scene of the PLL series finale revealed that Mona moved to Paris and opened a fancy doll shop named Forêt du Roses, which roughly translates to “Rosewood.” (Aww!) She even snagged herself a hot Parisian boyfriend. (Another aww!)  Less cute, however, is what’s going down in her store’s basement: She’s keeping the show’s two Big Bads, Mary and Alex Drake, in a living dollhouse. (“She can’t keep us here forever,” Mary said, to which Alex replied, “Of course she can. She’s Mona.”)

All of the above will be addressed — to varying degrees — in Wednesday’s series premiere of Pretty Little Liars: The Perfectionists. Will you be watching? Drop a comment with your thoughts on the Freeform spinoff below.