NBC’s promo for the conclusion of The Voice’s Season 16 Blind Auditions promised us that the best had been saved for last. But a) hasn’t every promo in the history of promos insisted that what’s coming next will be the best, and b) could there really have been contestants waiting in the wings that were better than four-chair-turners like Team John Legend’s Shawn Sounds and Maelyn Jarmon? Read on, and as we review the evening’s performances — including one by Red Marlow’s nephew, Jackson — we’ll decide whether we were right to disbelieve the hype.

Celia Babini (Team Adam), “idontwannabeyouanymore” — Grade: A- | “Literally captivating” was how Blake described this 17-year-old New Yorker’s reinterpretation of Billie Eilish’s hit, which replaced the airy vocals of the original with bluesy, ballsy ones that the coaching panel thought fell somewhere between Adele and Fiona Apple. She stumbled slightly here and there, but only slightly, and even then, I thought it was altogether forgivable since she seemed to be feeling the song as much as singing it. Not sure she isn’t too original for The Voice, but she’s definitely someone I’ll be looking forward to hearing again. 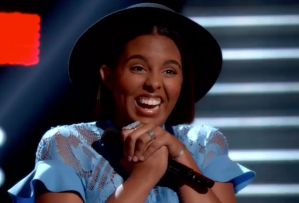 Cecily Hennigan (Team Blake), “Foolish Games” — Grade: A- | This South Carolina 16-year-old, who went viral by singing her heart out at a fast-food drive-through, hit the stage with a vocal that started off so pristine, it reminded me of Sarah McLachlan. It was that good. During the emotional points of the Jewel cover, Cecily’s performance was a little less flawless — but only a little. And the vulnerability in her voice then more than made up for it. Had she auditioned earlier in the Blinds, she surely, surely would have gotten more than just a single chair turn.

Kalvin Jarvis (Team Adam), “A Good Night” — Grade: C+ | An assistant manager at a breakfast restaurant, Kalvin told us in his pre-interview that his dad had been a rapper before he got into (and back out of) the drug game. On stage, the contestant radiated cool confidence, but his vocal was just OK to pretty-good. We’ve definitely heard better guys in his lane this season. John said that Kalvin did a great job, but tellingly, he didn’t turn his chair around. “I was being very nitpicky about my own song,” he suggested afterward. Maybe, or he could’ve just been waiting for a more memorable vocal. Kalvin wasn’t bad, but you’re unlikely to be talking about his performance tomorrow. 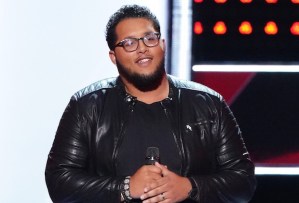 David Owens (Team Kelly), “I Can’t Make You Love Me” — Grade: B- | This 24-year-old Indianan told us in his getting-to-know-you segment that he’d felt uneasy about pursuing music growing up because his large family hadn’t had a lot of money. Now the newlywed dad hoped to make his baby son proud by taking a chance. I suspected more likely when Junior is old enough to see the audition, he’ll be like, “Dad, why’d you go and mess with Bonnie Raitt’s song so much?” Still, David proved that he has a good lower register, decent range, some power to his pipes — and he wasn’t afraid to tweak a classic. Definitely has some potential; just a question of whether he’ll be able to realize it. 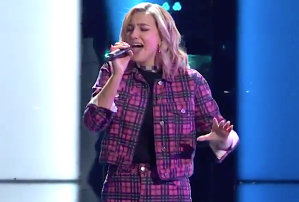 Presley Tennant (Team Kelly), “Stone Cold” — Grade: B+ | This self-described tomboy — once a member of a little-princesses girl group — began her performance with a light, breathy vocal, then turned up the volume until I was surprised she wasn’t getting chairs to turn just through the sheer force of her voice. “That’s a big ol’ range, y’all,” Kelly said afterwards. She couldn’t believe that this rafters-rattling performance wasn’t getting a bigger reaction. I wasn’t as wowed by Presley as I was by Celia and Cecily, but I kinda agreed with Kelly. That was a voice that you’d notice.

Rod Stokes (Team Blake), “To Love Somebody” — Grade: C | Describing himself before his performance as a male Kelly Clarkson, this 34-year-old Alabaman told us that gospel singing was all he had ever known (even though he was drawn to ’90s country). On stage, he proved that he had a big voice, and a distinctive one, too — it kinda reminded me of a froggy Pryor Baird. And I could definitely pick it out of a crowd later. But it didn’t sound entirely like he knew how to harness its power. So when all was said and sung, I wasn’t blown away by Blake’s pick to round out his team. He has at least two country boys that I like way better. 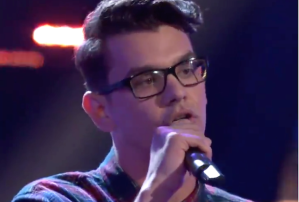 Andrew Jannakos (Team Adam), “Beautiful Crazy” — Grade: C | Adorkable Andrew was presented as an actual Blind Audition — you know, one of the tryouts where we don’t see the contestant until he’s gotten at least one chair turn. So the reveal of this country singer’s Clark Kent-ness was fun. Unfortunately, he didn’t sound super, just nice — nothing more, nothing less. Adam praised Andrew’s voice as being absolutely unaffected. And perhaps it was. It was pleasant and had a bit of richness to it. It just wasn’t terribly interesting. I’ll be surprised if Andrew makes it past the Battles.

Kayslin Victoria (Team John), “Feel It Still” — Grade: C+ | This bubbly teen described taking a break from her work at a horse-rescue farm to audition for The Voice as “the most craziest thing” she’d ever done. Taking her place in the spotlight, she definitely looked like a star, and her voice had some oomph to it — here and there a cool growl, too. But maybe she just doesn’t have “it.” Despite how energetic Portugal. The Man’s hit is, Kayslin’s performance felt kinda… flat. Like, I wanted to like her more than I did. Promo be damned, these last few contestants definitely had not fallen into the best-for-last category.

Jackson Marlow (Team Kelly), “Troubadour” — Grade: B- | With one slot left on her team, Kelly was determined to get herself a great male country singer (and interestingly, the show let us see snippets of her turning down auditioner after auditioner in her single-minded pursuit of that goal). Since Jackson is the nephew of Red Marlow, even before he’d sung a note, I reckoned Kelly’s wish was gonna be granted. On stage, the 18-year-old was good but definitely no Red, Part 2. He sang with a credible twang and an appealing tone; however, he didn’t radiate authenticity the way his uncle always did, or really stand out. Carter Lloyd Horne from Team Blake is still my favorite country boy thus far this season.

So, what did you think of the last Blinds? Were they really the best of the bunch? Do you have a favorite to win already? Vote for Monday’s standout below, then hit the comments.