Season 2 of Black Lightning unspooled so many storylines and uncorked many character arcs that the show seemed a bit disjointed at times. Monday’s season finale, though, tried to tie up all the loose ends — and throw in a few surprises along the way. 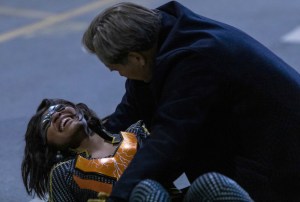 The Doctor Is Out
As Gambi rushes to Jennifer’s side after her powers malfunction, twice-resurrected Lala emerges from the shadows to make sure the old man isn’t aligned with Tobias. Jennifer goes to her safe place, where a manifestation of Perenna tells her that flexing her power is as simple as finding the right muscle. She is able to regain control, but injures Gambi with radiation burns in the process. When Jefferson and Anissa arrive, the latter takes Jen and Gambi back to the sanctum.

Jefferson decides to search for evidence Tobias might have left behind and finds the pods. Crazy-eyed Dr. Jace shoots at him, but promptly gets her ass kicked on sight by Lynn. The psycho doctor makes a deal, offering info about more homicidal metahumans being turned loose on the city in exchange for police protection. She’s taken by a Markovian bounty hunter while in custody.

At Tobias’ place, he vents to Cutter about being run out of his building, but she counters that he needs to have a plan. Once she gets an alert that the officers who shot Cape Man won’t be charged, Tobias sees it as an opportunity to bring Freeland to its knees like L.A. in the ’90s. His plan? Cut the power to increase the violence… and decrease Black Lightning’s powers. 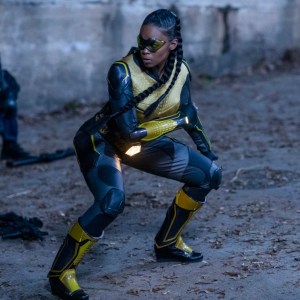 Dark Times
After Gambi recovers, thanks to Anissa and Jennifer, he checks on Jefferson and tells him to come in because without an energy supply, his suit is powering down. Anissa leaves to help her father, and Gambi initially plans to turn the power back on alone, but Jennifer convinces him to change his mind despite the instability of her powers and lack of tactical training.

New Wave and Heatstroke, two of Tobias’ metahuman army dubbed the Masters of Disaster (yawn), are out wreaking havoc in the same spot where Jefferson powers down. (How conveeeeeenient.) Thunder arrives right on time, and a fight ensues. She and Black Lightning are holding their own until the other Masters, Shakedown and Coldsnap, intervene. The heroes are outnumbered, but Lala once again emerges from the shadows (dramatic much?) and shoots Heatstroke dead. Lala tells Black Lightning their beef is over, and his only mission is to kill Tobias.

When Gambi and Jennifer find the city’s frozen generator, he tells her to shoot short bursts of energy to unthaw it, and it works! Once the power comes back, Black Lightning powers up and is able to save himself and Anissa from Coldsnap and New Wave, and the two knock out Tobias’ powerful but ineffective soldiers.

Pit Stopped
Frustrated that his plan is failing, Tobias opens the briefcase to release even more unstable metahumans. Cutter interferes because releasing the pods will destroy everything they’ve worked for, but he chokes her. She breaks free and pulls a knife on him, but decides to leave him rather than kill him. Tobias releases the pods before Lynn can initiate the serum to stabilize them. With the briefcase in use, Gambi tracks down its location, and Jennifer flies there. Lala, though, gets there first. Tobias still has mind control of over his onetime soldier, and says “E Pluribus Unum” which kills Lala for the third (and final?) time. Soon after, Jennifer breaks through the window and has Tobias in her clutches. Jefferson stops her before she makes a life-changing decision, and subdues the criminal so he can be turned over to the authorities. Tobias, outfitted with a collar around his neck, is imprisoned in “the pit,” an inescapable black site that doesn’t exist on a map. The red flashing lights mimic his rage. 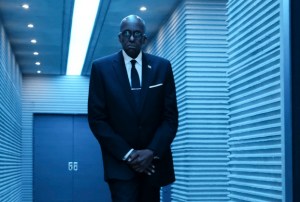 This Means War
Agent Odell is in a facility with three pods containing the bodies of Issa, Wendy… and Khalil! He then goes to the Pierce home, where the family is laughing and celebrating their safety. Odell tells them he knows exactly who and what they are. (Shouldn’t everyone know by now, though? Their masks only cover their eyes.) He says the Markovians now have Dr. Jace and the largest stockpile of metahumans on Earth, and the concentration of metas in Freeland (courtesy of the vaccines and the Green Light Experiment) make it the greatest threat to Markovia. War is coming, and Freeland is ground zero.