I’d like to begin by congratulating you — and your many empty Kleenex boxes — on surviving 10 hours of American Idol auditions. It hasn’t always been easy, but at least we can take solace in knowing that most of the people we’ve come to know and love will soon be eliminated, making the whole introductory process kind of pointless. (Wait, what?)

In addition to concluding the 17th year of auditions, Monday’s episode also summoned back a few of last season’s heavy hitters — including winner Maddie Poppe, who surprised the judges (and me, I’ll admit!) by posing as a super emo contestant from Nebraska named Lady Mapo. (Get it? Mapo, as in Maddie Poppe?) “Last year was boring,” Lady Mapo told the judges. “It was too American.” Honestly, I didn’t realize it was Poppe after she took the black wig off. I needed to hear the judges refer to her by name in order for it to register, which is either a testament to the show’s hair and makeup department… or a sign that I need to rewatch all of last season. (Let’s go with the former.)

But enough about my long-term memory issues. It’s time to break down the 11 most dynamic auditions — besides “Lady Mapo,” of course — from Monday’s episode… 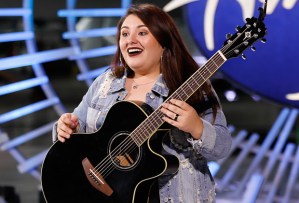 JADE FLORES, 22 | You can’t judge a book by its cover, nor can you judge a singer based on how they act when they enter the Idol audition room. Take Jade, for example, who came in at an 11 and started nervously rambling about how she and Katy have a “spiritual, rebellious connection.” (Sure.) I was ready to roll my eyes… but then she started to sing. Her take on Deana Carter’s “Strawberry Wine” was perfection — beautiful, polished and mature. Lionel pointed out, as he sometimes does, that Jade is more than just a singer, she’s an entertainer.

JAKOB O’BRIEN, 18 | Actually, I take back what I said about not judging a singer by how they act when they enter the room. From the second we met Jakob, clad in an American flag shirt and talking about how he’s “just proud to be here,” I knew exactly what kind of performance we were in for, though I didn’t an original song literally titled “Merica.” Did I feel bad for laughing? Sure. But did that stop me from laughing? Absolutely not. I appreciated the judges’ candor as they let him down easily.

CHRISTIAAN PADAVAN, 19 | Real talk: I was not expecting this Hampton Bays teen to make it through based on his just-fine performance of Billy Joel’s “Vienna. If he was a friend of mine and sang that at karaoke, I’d be like, “Oh, wow, I didn’t know you could sing.” But I certainly wouldn’t say, “You’re amazing! Go audition for American Idol.” Frankly, I thought we were being set up for another “surprise” audition when Christiaan mentioned he brought his “shy” girlfriend, who also sings, with him. But unlike other bait-and-switches we’ve seen in the past, his girlfriend’s somewhat sultry performance of Britney Spears’ “Toxic” was just for fun.

RYAN HAMMOND, 25 | I’ve always felt that American Idol — particularly once it was revived by ABC — relied too heavily on backstories, and this is a perfect example. Did we need to know about Ryan’s 170-pound weight loss (via surgery) in order to appreciate his impressive, unique take on Sam Smith’s “Lay Me Down”? Of course not. As Katy put it, his voice would still be a “gosh darn miracle,” even if ABC hadn’t walked us through Ryan’s entire, mostly unrelated history. That said, this was an obvious yes, and I’m looking forward to seeing more of Ryan.

CHLOE CHANNELL, 16 | Maybe it helped that she was backed up on guitar by Grammy Award-winning country artist Billy Dean, but this Florida native still impressed the heck out of me. Her performance of Keith Urban’s “Stupid Boy” began softly, then grew logically as her emotions began to stir. We got a nice sense of both her range and her attitude as a performer, and I expect big things from her this season.

EMMA KLEINBERG, 21 | Another Idol vet, Emma recalled auditioning with her brother Alex when they were “way younger,” though much has changed since then. After college, Alex was diagnosed as bipolar, and a suicide attempt left him with an anoxic brain injury. What does this heartbreaking tale have to do with Emma’s audition, you ask? As always, not much. Still, her performance of Alan Stone’s “American Privilege” absolutely blew me away — easily one of the best auditions we’ve seen all season. Even Katy asked, “Was that the whole song?” I could have listened to her forever.

ZEBULON “ZEB” SPENCER, 27 | Despite having a name befitting a character from Zenon: Girl of the 21st Century, this clog-dancing North Carolinian (state champion flat footer ’07/’08 in the house!) has a pure country soul. His performance of Muscadine Bloodline’s “Porch Swing Angel” was everything it needed to be without feeling forced, and he’s clearly raised his little girl right. (When Ryan Seacrest asked if she would hug her dad if he gets through, she replied, “Even if he doesn’t!”) Fortunately, he did.

JORGIE, 23 | OK, this one was a lot. Not only did Jorgie use his audition to come out to his family on national television, but he also proudly displayed an impression of Katy that was… well, it wasn’t Katy, that’s all I know. I wasn’t expecting much from Jorgie, who brought along his band — Jorgie and the Jorgies, I kid you not — for the performance, but everything changed when he opened his mouth. Singing an original song titled “Heaven,” about his unrequited love for another guy who didn’t he was gay, Jorgie gave us something beautiful, heartfelt and real. He has a nice falsetto, and an overall original sound. I’m not sure he’s Top 10 material, but I’m curious to see how he does in the next round.

NICK MERICO, 22 | Formerly an actor on Nickelodeon’s Every Witch Way, Nick worried that his time on the show would make him seem less serious as a musician, which is what inspired him to audition for Idol. The Florida native’s performance of Amy Winehouse’s “Back to Black” was “as close to crooning as [Lionel had] ever seen,” and Katy was so smitten with Nick, she could barely look him in the eyes. Luke, meanwhile, was just jealous.

JARED SANDERS, 20 | This audition proved that the music industry is about much more than just who you know. This firefighter from Georgia also happens to be best friends with last season’s runner-up Caleb Lee Hutchinson, who joined him for moral support. Unfortunately, based on his performance, the judges felt that it’s just not the right time for Jared, encouraging him to come back in a year or two. 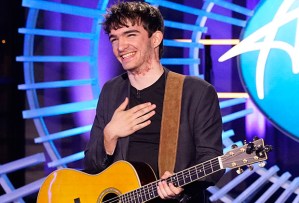 JACKSON GILLIES, 19 | The last-ever audition of the season introduced us to an inspirational fella who’s been struggling with diabetes and hidradenitis suppurativa, a skin condition with no cure. He taught himself guitar during a two-month period where walking became too painful, which he credits for helping him push through to the other side. His performance of Ed Sheeran’s “Make It Rain” was so growly and powerful, I had to double check to make sure that it was actually an Ed Sheeran song!

Vote for your favorite auditions from Monday’s episode in our poll below, then drop a comment with more of your thoughts.