Toggling back and forth between the present and past, Sunday’s The Walking Dead at last revealed what transpired during the time jump that prompted Michonne to roll up Alexandria’s welcome mat — and left her and Daryl with the “Scars” that gave the episode its title. It also ushered into the fray, however briefly, a guest star who’s had more experience with vampires than zombies. Who was it? Read on… 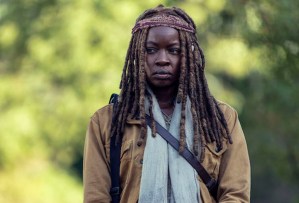 ‘THIS ONE’S BEEN KICKING THE S— OUT OF ME EVERY MORNING’ | The hour began back when Michonne was pregnant with R.J. but still scouring the area for any sign of Rick. On one occasion, she found his gun. On another, she found Daryl and learned that he’d followed the river all the way to the ocean and back — nada. Still, “I ain’t gonna stop looking,” he insisted. “Not ever.” In the present, Michonne had no sooner put back Rick’s — now Judith’s — gun in its box when Aaron announced that Daryl was at the gate — and he wasn’t alone; he was, of course, with Henry, Connie, Dog and Lydia. Despite Michonne’s no-admittance policy, she couldn’t turn away Daryl, so she let them all in so that Henry could get patched up. (Also, who could say no to Dog?) Back in the past — and don’t worry, rather than give you whiplash with this then-and-now business, from here on, I’ll just tell you what happened then all the way through, then we’ll return to the present — Rosita brought some kids to Alexandria’s gate. And what are the odds? Michonne just happened to have once been besties with the group’s lone adult, a woman named Jocelyn (Queen Sugar’s Rutina Wesley, late of True Blood). 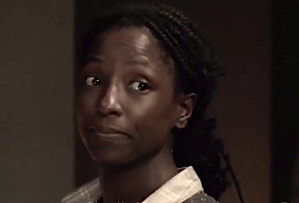 Despite the newcomer’s injuries, she immediately wanted to go back out to save the other youngsters they’d left behind. Rather than let her do so in her condition, Michonne had an older boy from the group lead her, Aaron, Eugene, Rosita and Gabriel to a place where Jocelyn had once hidden her troupe. And lo and behold, that was where the angel-faced moppets were. That night, after Michonne marveled at what excellent hunters the kids were — they’d killed enough game to open their own barbecue joint — Jocelyn shared that the adults that had been with them “just… broke. The children… they grow, they learn, they’re capable of anything.” Jocelyn also revealed that she could still read her old college classmate like a book: For instance, she knew that Michonne’s expression meant that she had to keep searching for her missing man. In the morning — I’m not 100 percent clear on whether this was the following morning or some time later — Michonne and some other parents went to pick up their offspring from a sleepover with Jocelyn’s kids. Only neither were Jocelyn or the kids at the house in which they’d been put up. Ruh-roh. 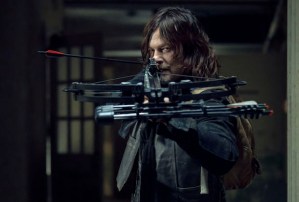 ‘I TOLD YOU KIDS ARE CAPABLE OF ANYTHING’ | Upon finding a dead Alexandrian as well as the pantry and infirmary raided, Michonne and her fellow parents realized that Jocelyn had spirited away the kids — all of ’em! Teamed up with Daryl in search of the youngsters, Michonne blamed herself for letting her guard down with her old friend. It wasn’t her fault, though, Daryl said. “Some people just got so much evil in their hearts, they hide it like they’re wearing a mask or something. This is on her.” After the two of them tracked the whippersnappers to a school, those angel faces suddenly looked decidedly devilish. One shot Daryl with an arrow, and another knocked out Michonne. Then, with Jocelyn observing, the kids coldly prepared to brand their prisoners. “The strong survive,” said little Linus as he burned an X into Daryl’s back. “And thrive,” added his twisted teacher, bragging to Michonne that she’d taught them to be merciless. After all, “they can’t be soft, not now.” With that, young Winnie singed Michonne’s flesh. Later, as you’d expect, Michonne and Daryl got free. 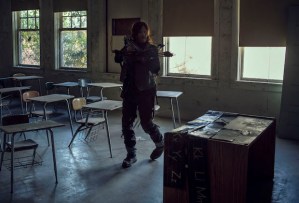 After our heroes split up to search for Judith and the Alexandrians, Michonne first was slashed in her pregnant belly by a kid, then nearly bludgeoned to death (or at least unconsciousness) by Jocelyn. In the end, Michonne was forced to kill not only her old friend but… aw, man. Poor Michonne. She invited Jocelyn’s gang to come back and live in Alexandria, but their teacher had warped their minds so badly that they preferred instead to attack Michonne. The older boy even ordered Winnie to slaughter the Alexandrians! In the end, Michonne wound up having to kill all but one of Jocelyn’s JV murder club. (Winnie chickened out and ran. And while we’re on the subject of Winnie, how slowly did she move when given the order to kill? She hadn’t even made it into the camper in which the Alexandrians were huddled when Michonne was done dispatching her fellow brats.) At least Judith and the Alexandrians were OK. For a second, Michonne feared that Jocelyn had warped her brain, too. But then Lil’ Ass-Kicker cried “Mommy” and ran to her. 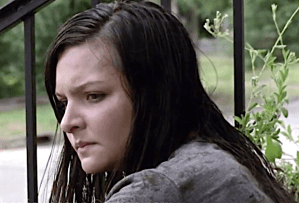 ‘YOU HAVEN’T HEARD ALL THE STORIES’ | In present-day, Daryl told Michonne that, after Henry was stitched up, they’d head to the Kingdom. “This wasn’t the plan,” Connie wrote to Michonne, “but I’d do it again. With different shoes.” (And it has gotten pretty hard not to like Connie, no?) When Henry noted that he’d have a scar forevermore, Lydia said that she liked it. “You’ll never forget what you did. Neither will I.” Upon getting the (former?) Whisperer alone, Michonne attempted to put an idea in her head. “To save my people, I’ve had to risk others,” she said. “I’ve made my peace with that. Might be easier if the only life I had to risk was my own, if I could just walk away and… make everyone else safe. Now that wouldn’t be so hard. Think about that.” Nearby, Judith cross-examined Daryl like a top attorney, getting him to admit that he’d helped Lydia even though it might have put Hilltop in danger, then busting him when he said Michonne was right, keeping her and Judith safe is what’s important. “No, it isn’t,” she argued. “I mean, not just us.” (Somewhere, Carl had to have been smiling… )

When Daryl set off that night with Connie, Dog, Henry and Lydia, he suggested that Michonne tell a disgruntled Judith the truth. “She’s not ready,” she replied. “Neither am I.” What’s more, “she gets to keep being a kid as long as I can help it.” Getting in the last word, Daryl made it count. “That’s not just a little kid ya got there,” he said. Later, when Michonne went to Judith’s room to take Daryl’s advice, she found her daughter missing. Immediately, she headed for Negan’s cell and demanded that he tell her what the two of them talked about. In addition to stories about the Saviors war and how much like Carl Judith is, Negan discussed with the little girl her dim view of her mom’s no-newbies policy. Off the prisoner’s remark that Judith might be doing what Michonne would — “not taking s— lying down” — Michonne ran home and found a letter in Judith’s gun box. “I’m sorry, but I need to go,” it read. “Our friends need help.” The following morning, Michonne at last tracked down her daughter, just in time to save her from a bunch of walkers (many of whom the kid had handled fine, it should be noted). “We need to talk,” Michonne told her.

‘I THOUGHT I WAS TOO LATE’ | Back in Alexandria, Michonne went through the whole Jocelyn story, right down to the moment when she’d been afraid that the madwoman had warped Judith’s brain. “You didn’t look like you because of the blood; that’s all it was,” Judith said. Turned out, she remembered everything! Why hadn’t she spoken about it in so many years? “Because it made you sad,” Judith explained. All this time, Michonne marveled, “I thought you didn’t understand [why Alexandria had been shut off] because you didn’t know, but you did.” How on earth did they get to this place? “Our friends need our help,” Judith said matter-of-factly. And then she spelled things out as simply as beautifully. “You’re my mom,” she told Michonne. “You chose to be because you love me and I love you, and loving someone means doing whatever it takes to keep them safe, right? But when did we stop loving Daryl… Aunt Maggie… Carol… the King?” They hadn’t, Michonne insisted. “Then why,” Judith asked, “does it feel that way?” (Game, set, match.)

As the episode drew to a close, Michonne took Judith to the grave that she and Rick had dug for Carl. That day, “I made a promise to never bury another child again,” she said. But after losing Rick and almost losing Judith, “I was scared.” And since she wasn’t the only one left fearful in the wake of the Jocelyn incident, the decision was made to make Alexandria only about the people who lived there. But, she now thought, “we have to protect the people we love — all the people we love. And we will.” With that, the two of them set off in a horse-drawn convertible to give Daryl & Co. a lift to the Kingdom. Of course, since no good goes unpunished, the group was spotted reaching their destination by Whisperers who were only too eager to report back to Alpha. So, what did you think of the episode? Rutina Wesley’s guest turn? The explanation of Michonne and Daryl’s scars? Hit the comments.