Project Runway returned to Bravo on Thursday with a slightly updated look, an almost entirely new panel of judges and 16 diverse designers hoping to leave a mark on the fashion industry. But die-hard Runway fans — those who watched it on Bravo (2004–2008) and followed it to Lifetime (2009–2017) — were presumably pleased to discover that very little about the competition itself has changed.

For their first challenge, the designers pulled inspiration from photos of their judges — Karlie Kloss, Nina Garcia, Elaine Welteroth and Brandon Maxwell — taken at a moment when each judge felt truly impacted by the power of fashion. Or whatever.

As if the designers weren’t stressed enough already, a new twist (of sorts) was introduced midway through the challenge: In addition to the outfit selected by the judges, a second designer’s creation (as voted by the show’s viewers on Instagram) would also be produced on-demand by Nineteenth Amendment and available for purchase on BravoTV.com.

Though she feared her look might be a little too “minimal” compared to the other designers’ creations, Tessa Clark ended up nabbing the season’s first win. “We felt that we could identify with your look,” Nina told her. “It felt like any of us could be wearing that.” In addition to having her design manufactured and sold online, Tessa also received immunity in next week’s challenge.

“I was not expecting this at all,” she admitted. “I feel very honored, but I’m also kind of shocked. Winning this first challenge really shows the contestants and the judges that I have a point of view, I have good taste and I’m definitely one to watch out for in this competition.”

As for the season’s first bottom two — Cavanagh Baker and Frankie Lewis — I wish I could say I was surprised. When Cavanagh’s look hit the runway, she admitted that she wasn’t feeling “too hot” about it, worrying that it might be too “basic.” Meanwhile, Frankie “felt sick” by how poorly her design turned out, as she hoped the judges might see past her “construction issues.” Despite Karlie telling Frankie that the judges have questions about her “taste level,” she remained in the game and Cavanagh was sent packing. 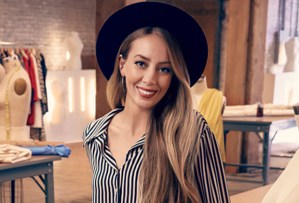 While Cavanagh was a good sport about her elimination, she also took the opportunity to defend herself. “I wasn’t expecting to ho home on the first challenge,” she said. “My garment was flattering and had detail, while other garments … were thrown together without thought.” Then came this last dig: “I’m so ready to wash my hair and to sleep on a real bed with a real pillow.”

OK, let’s talk about Project Runway’s return to Bravo: What do we think of Karlie and Christian as the new Heidi and Tim? And which contestant(s) are you keeping an eye on? Grade the premiere below, vote for your designer of choice and drop a comment with your every thought.