The annual Miss Mystic Falls pageant arrived on Thursday’s Legacies, bringing with it all the requisite drama — and leaving several fan-favorite pairings in serious jeopardy. (Hey, at least no one died this time.)

Lizzie initially had her heart set on Caroline’s former title, but when she discovered that Dana’s mother was one of the judges, she decided — much to Josie’s disappointment — that Hope was her best chance to “stick it to those townies” with a win. (Does anyone else think it’s weird that Lizzie is so anti-townie, considering she was also born and raised in Mystic Falls?) Anyway, Penelope tried to convince Josie to beat Hope, but Josie was too loyal to her sister to mess up her master plan. Furious with Josie for once again putting Lizzie first, Penelope started spilling a bunch of secrets she’s collected as of late… including that she should ask Alaric about “the merge.” Gulp.

But before Penelope left school, breaking Josie’s heart in the process (that L-bomb!), she also revealed to Landon that Hope has been lying about meeting his mother — not that “Lope” needed any more drama this week, what with Roman showing up out of the blue. (Really, Alaric? You couldn’t have hired literally anyone else?) This set off a dramatic chain of events: Landon storming out, Roman filling in as Hope’s escort, Josie calling Lizzie out for being heartless, and even Hope discovering that her dress was picked out by Klaus. The tension culminated in an emotional outburst from Hope, guided by Lizzie, who’s all too familiar with the magical side effects of trauma. Lizzie even made her a deal: “You help me get Josie back, I’ll help you get Landon.”

And speaking of getting Landon, Hope’s angry ex(?)-boyfriend ended the episode in Agent Clark’s custody, delivered by MG’s mom, who’s apparently Clark’s superior. I have to admit, it was a twist I didn’t see coming — mostly because we’d spent most of the episode worrying about the freaking Gorgon skulking around campus and turning people into stone.

Below, Danielle Rose Russell breaks down the episode’s biggest moments with TVLine, including how Roman — despite, you know, his involvement in Hayley’s death — remains a very real threat to Hope and Landon’s relationship… 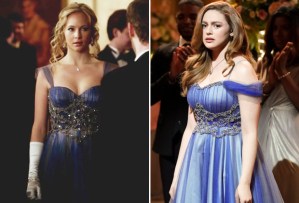 TVLINE | Was that the actual dress Caroline wore on The Vampire Diaries, or did they design a replica?
It was the actual dress! They got it from the Warner Brothers. archive. But the problem is, the dress was made for Candice [King], who’s about seven inches taller than me. We had to be so specific about how we shot the dress. The costume team and I did hours of fittings, trying to get it OK. For example, we couldn’t shoot it from the side, because I have about four inches of toile alone on the front and back of me. So we could only show it from the front, or else I’d look like the girl from Willy Wonka who turns into a blueberry.

TVLINE | I never thought I’d see Hope and Lizzie getting along so well. Could this be the end of their life-long feud?
You know, it could be. I was also very surprised, because in the beginning of the season, everybody thought Hope and Josie would be the ones becoming friends. I was also surprised by how much Hope and Lizzie have in common, while still being so different. They annoy each other, but they also put up with each other. It’s a fun relationship that I’d like to see explored a little bit more in Season 2.

TVLINE | Then again, I never thought I’d see Hope getting along with Roman either. Were you surprised by her behavior?
Very much so. In my head, I always want Hope to get revenge, but she really has worked so hard [to improve herself]. In the last episode, you saw that even in the middle of a dark, painful moment — seeing Landon dead — she still gave MG her blood. She had a moment of understanding that she doesn’t want to be another vengeful Mikaelson. She wants to be good, and she’s always fighting for that. You could see that Hope had a tough time coming to terms with Roman. There’s a reason why she never talks about it, but I think she has genuinely forgiven him and she’s moving on from that.

TVLINE | I guess when you’re a Mikaelson, you get used to encountering people who have murdered your relatives.
Exactly! It just happens.

TVLINE | We didn’t see Roman leave. Is he sticking around?
You’ll see him again a little bit. That relationship will come to a head, as well.

TVLINE | I get that Landon was insecure, but is there any world in which Hope genuinely sees Roman as a potential love interest?
I don’t know. I go back and forth about it, actually. I always thought the dynamic between Hope, Roman and Landon would be an interesting love triangle. So I do have an idea in my mind of how that would happen, but I’m keeping it to myself in case it does. In Hope’s right mind, I’ll say, there would be no world. But Hope is also not a vampire yet, but she could be. There are many mistakes she could make if things go sour.

TVLINE | Lastly, let’s talk about Penelope, who blew up multiple people’s lives this week. How do you feel about everything she did, and the character in general?
The relationship between Josie and Penelope, to me, has always been fascinating. I’m interested to see the fans’ reaction to Penelope leaving, though I do think that’s sort of the only way that relationship could have gone. In order to give Josie what she deserves, all of this had to happen. So I don’t hate Penelope. I think she was super clever and smart, and I was always interested to see what she would pull out of her hat. She obviously also hurt Landon and Hope’s relationship, but the truth had to come out eventually.

Your thoughts on this week’s Legacies twists? Any stand-out performances? We’ve got a lot to talk about, so hit the comments with your every reaction.