Next up is a sitcom about… OK, the title’s kind of on the nose with this one.

THE CASE FOR KEEPING | One episode was all it took for this sprightly, sweet-hearted sitcom from New Girl vets Elizabeth Meriwether and J.J. Philbin to make us want to hang at the Winebrary with the show’s titular single parents. And every installment after it only left us more enamored of the folks who populate “the grid.” (Leighton Meester’s harried Angie and Jake Choi’s dingy Miggy are our favorites — as if we’d ever play favorites!) What’s more, the series has made the kids as quirky, distinct and likable as the adults. (Devin Trey Campbell’s manipulative, flamboyant Rory is our favo… oh, right. We said we weren’t playing favorites.) 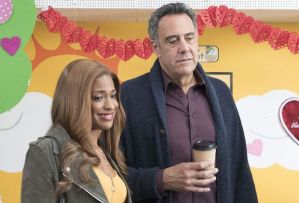 On top of all that, we’re dying to find out if we’d like it as much as we think we would if the show paired up curmudgeonly Douglas (Brad Garrett) with much-younger firecracker Poppy (Kimrie Lewis), and more than a little curious to see whether Angie’s boyfriend Owen and wide-eyed weatherman Will’s (SNL alum Tarran Killam) boss/love interest Tracy have staying power. (We dig both Champions alum Andy Favreau and Jama Williamson, aka The Good Place’s Val.)

THE CASE FOR CUTTING | Creatively, there just isn’t one. Single Parents is smart, funny, feel-good and has introduced us to such terms as “mailmanning.” (Thanks, Miggy!) However, after premiering to 4.9 million total viewers and a 1.3 rating, the show is now doing about 60 percent of that, ranking No. 8 (in audience) and No. 7 (in the demo) out of ABC’s nine non-Friday sitcoms. Also concerning, it hit season lows as recently as February 13. ABC has only renewed one comedy thus far, Modern Family (via a final-season announcement), and it has seven sitcom pilots in the pipeline under new network boss Karey Burke, so it’s hard to tell where this freshman will land after a possible line-up shake-up.

Vote below, then state your own case for keeping or cutting Single Parents.