This week on The Flash, Barry & Co. endeavored to find Orlin Dywer aka Cicada and convince him to take the cure. But would doing so actually end their problems?

Nora travels to the future to let Eobard know that the cure is finished, as planned, and now they will use it on Orlin to break his connection to the power-dampening dagger. Eobard, though, has bad news to share: as seen by a flickering newspaper front page, of The Flash’s final confrontation with Cicada, a new timeline is struggling to break through. So the window is closing, on Barry’s chance to vanquish his new foe. If missed, “a new variable is coming,” Eobard warns. “Something big, or someone.”

With that in mind, Nora starts cracking the whip at STAR Labs, ensuring that every available resource is being employed to find Dwyer. Her obsessive nature gets to a point where Iris has to send her away to a fake meta emergency. Later, Barry and Iris distract Nora with some family time at Jitters, where they reveal the shop’s new XS-presso. The fun moment is interrupted, though, by news of a meta at the college’s chem lab. “Acid Master,” as he will eventually be called, consumes acid and then is able to shoot it from his hands. His getaway leaves a mark on the floor that causes Nora to realize that Acid Master is the meta Cicada was chasing on the day of The Flash’s final confrontation. Meaning, today is the day!

Sure ’nuff, Cicada that night goes hunting Acid Master, only to walk into a trap and get a blast of Killer Frost instead. The Flash then shows up and makes his appeal to Orlin to take the cure. Why? Barry says it could change Orlin’s legacy, from monster to hero. Oops, Barry guessed wrong. Orlin doesn’t give a damn about his legacy, and so he whales on Barry before flying away — never to be found again?

Meanwhile, Cecile offers to help Joe make a dent in the Cicada Task Force files, and they surmise that Dr. Vanessa Ambres has been oddly attentive to Orlin Dwyer’s comatose niece, Grace — and all while certain drugs have gone missing. At the hospital, Joe questions Ambres about Cicada’s possible accomplice, while Cecile alerts him to when the doc is lying. Joe gets a bit uneasy with the use of Cecile’s powers, sparking a tiff ‘tween the two. But following a pep talk with Barry, Joe apologizes to Cecile and invites her to team up again. This time around, they confront Ambres with their “hunch” that she is helping Dwyer. The doc doesn’t budge much until she hears that a meta cure is available. It is then that she agrees to lead them to Orlin — in part because his young niece Grace is a meta, too!

The Flash finds Cicada and tries a new approach, taking advice from Joe to address Orlin as Barry, a father. Barry breaks the news that Grace’s meta power has manifested, through the wound in her head, but she can be cured, too. Orlin agrees to the procedure, and gets whisked to STAR Labs for the cure injection and then the closing of the gaping wound in his chest. But once he is cured and just as Ambres is sewing up the wound, the power at STAR Labs goes out. “Something worse” has arrived, in the form of another Cicada! Which was quite surprising… if you didn’t remember seeing this blonde-haired, leggier one when Barry and Iris entered Nora’s and Grace’s minds a few episodes back. 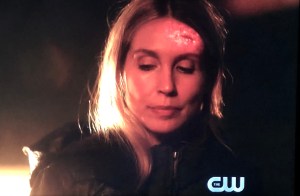 Cicada II (Ci-CAH-da?) has mad meta powers, which are used to toss around and or beat on everyone, from Cecile to eventually Barry, before the baddie goes and trashes the cortex for good measure. Catching Ambres trying to get unconscious Orlin into the elevator, Cicada II disregards the doc’s pleas and instead stabs her. Later, at a cabin, we see Orlin still out, where he is being tended to this Cicada, who removes her hood to reveal… Falling Skies‘ Sarah Carter aka Adult Grace!

What did you think of “Failure Is an Orphan”?