Hulu’s new comedy Shrill is quietly revolutionary in the way it approaches its main character: SNL cast member Aidy Bryant stars as Annie, a woman who is overweight… and who is actually totally fine with that, thanks for asking. (When a pushy exercise instructor tells her, “There is a small person inside of you dying to get out,” Annie jokes, “Well, I hope that small person’s OK in there!”) Shrill — premiering this Friday, March 15; I’ve seen four of the six episodes — is about the point in Annie’s life where she finally gets tired of smiling politely and cracking jokes when people tell her how she should live her life and starts sticking up for herself. And if the end result is a bit standard-issue indie comedy, the sheer fact that Shrill allows Annie to be herself, without trying to transform her, is worth celebrating. 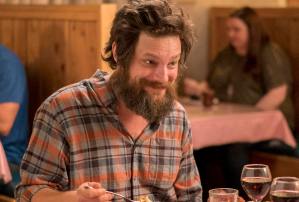 Annie is a low-level writer at a Portland alt-weekly — side note: how does this publication still exist? — where her perpetually annoyed editor Gabe (John Cameron Mitchell) considers her “a vital and tiny cog” in his media empire. She also has a bearded slob of a boyfriend named Ryan (People of Earth‘s Luka Jones), although “boyfriend” is probably too strong a word: After they have sex, he quickly hustles her out the back door so his friends won’t see her. At least she has a supportive best friend — British roommate Fran, played by Miracle Workers‘ Lolly Adefope, who has an instantly easy rapport with Bryant — who accepts her just as she is and encourages her to be bold and demand more out of life.

More than anything, Shrill is a long-overdue antidote to all the sitcom fat jokes we’ve been inundated by for decades. (Remember Monica in the fat suit on Friends?) Even today, This Is Us‘ Kate is mainly defined — negatively — by her weight, but Shrill makes sure that Annie’s weight is just one small aspect of her life. We also see the subtle pressure that even friends and family can put on her to lose weight, like her well-meaning parents (Julia Sweeney and Daniel Stern), whose words of encouragement just end up making her feel worse. Shrill really hits its stride in Episode 4, with Annie attending an inclusive “Fat Babe” pool party filled with plus-size people just having fun without being self-conscious about their bodies; it’s exhilarating and empowering, in a way we don’t often see on TV. 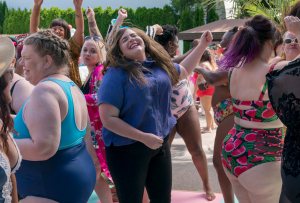 All that said, though, while it’s great to see Annie assert herself… that’s kind of all this show is? The stakes are very low, and it doesn’t have an especially deep roster of characters to draw from. It seems to be going for a Girls-ish vibe — it’s warmly lit with a jangly hipster soundtrack, and Girls vet Jesse Peretz directs the pilot — but it’s not as sharply observed or as funny as that show was. (Shrill is more in the Transparent vein of sad-com, where you don’t actually laugh out loud, you just sort of say to yourself, “Hmmm, that is clever.”) Although Annie is allotted a few small victories, things get pretty emotionally bleak for her at times, and Bryant — such a talented performer on SNL — is strangely muted here, never really getting to show off the comedic chops we know she has.

So while I appreciated Shrill, and what it represents, I didn’t really enjoy it, if that makes sense. I fully acknowledge that, as a skinny male TV critic, this show was not exactly made for me, and if it helps someone struggling with their weight feel seen and not so alone, I fully support that. I just wish that Shrill was as radically original everywhere else as it is when dealing with Annie’s body issues. (The character of Ryan, in particular, is an irritating amalgam of every bad-boyfriend stereotype you’ve ever seen. Of course he has a podcast.) As a representation of an underserved demographic, and a declaration of war on lazy fat jokes, Shrill is an unquestioned success… but as a comedy series, it falls somewhere short of that.

THE TVLINE BOTTOM LINE: Shrill blazes a bold new trail for the portrayal of plus-size characters, but falls too often into familiar indie sad-com patterns.