The following references the mildest of spoilers from the Captain Marvel motion picture.

To be fair, Agents of S.H.I.E.L.D.’s Phil Coulson has never been much of a name-dropper — in fact, through five seasons he proved to be downright modest about hanging with the Avengers prior to the Battle of New York. (R.I.P, if only for a bit.)

Still, there were a few times during his stint as S.H.I.E.L.D. Director that Coulson realistically would have related his and Nick Fury’s 1990s run-in with Carol Danvers (played by Brie Larson), a costumed warrior who visited Earth from the Kree’s home world of Hala to thwart an invasion by shapeshifting Skrulls. True, Coulson (played by a digitally youth-ified Clark Gregg) directly witnessed only some and not much of the action that ensued, but surely Fury looped him in on the juicier details, which Coulson could have in turn relayed, years later, to his agents of S.H.I.E.L.D. in the scenarios below. Maybe over a glass of Haig? 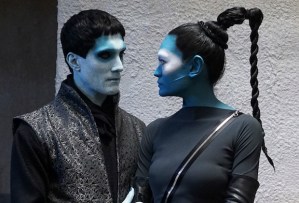 ‘HEY, SPEAKING OF THE KREE…’ | We saw Director Coulson lay eyes on a Kree-in-statis as he remembered his T.A.H.I.T.I. experience in Season 2, Episode 7. Midway through that same season, his obsession with alien symbols led the team to a subterranean Kree city, and after that Thor‘s Lady Sif arrived on Earth to track a Kree assassin. Later in Season 2, we were introduced to the infamous Kree monolith (careful, Jemma!), and jumping ahead to Season 5, the Kree lorded over a dystopian, future-Earth outpost. During any one of those scenarios, Phil could/should have been moved enough to mention, “Speaking of the Kree, did I ever tell you…?” 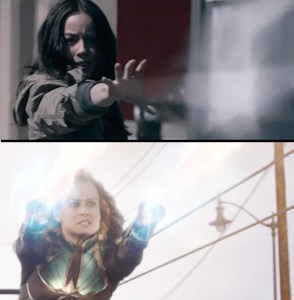 ‘HEY, SPEAKING OF PACKING A PUNCH…’ | Once Skye transitioned into Daisy and then went full-on, gauntlet-wearing Quake, Coulson might have observed a similarity to Carol Danvers’ similarly destructive, double-fisted proton blasts. “Boy, Daisy, seeing you blow away those bad guys like that reminds me of….”

‘HEY, SPEAKING OF SPACE-READY MODS…’ | Assuming that Captain Marvel‘s Coulson at least heard tell of how Carol Danvers’ BFF, Maria Rambeau (played by Still Star-Crossed‘s Lashana Lynch), modified an Air Force aircraft to be space-ready, when Agents of S.H.I.E.L.D.‘s Zephyr One underwent a similar upgrade at the close of Season 5, he could/should have thought to mention, “You know, this actually isn’t the first time that….” (But he was probably focused on, you know, dying. #TooSoon?) 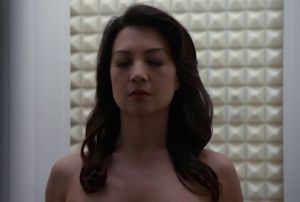 ‘HEY, SPEAKING OF EVIL DOPPELGANGERS…’ | Perhaps the strongest case for Agents of S.H.I.E.L.D.’s Coulson spinning a yarn about the events of Captain Marvel can be made when you recall his run-ins with Agent 33 and her Melinda May mask or, to be even more on-the-nose, the LMD storyline, where paranoia about body-stealing was rampant. Considering that Coulson himself was briefly “simmed” by a Skrull in Captain Marvel, surely he’d want to share his previous experience with, how shall we say, “identity theft.”

Can you think of any other instances where Carol Danvers, costumed space warrior, theoretically could/should have come up as a topic on Agents of S.H.I.E.L.D.?