As we approached Monday’s Night 5 of The Voice’s Blind Auditions — with Blake Shelton, Adam Levine, Kelly Clarkson and John Legend’s teams about half-full — I was wondering where our R&B divas were. Season 16 had thus far sent to the Battles some promising male soul singers (Matthew Johnson, LB Crew and Domenic Haynes). But where was the Kennedy Holmes of this go-’round? The Kyla Jade? Was Kim Cherry destined to be the lone woman in the R&B lane? Or were others going to be introduced Monday? For that matter, where was the rock dude who could out-WILKES Season 14’s WILKES? Read on, and as we evaluate the night’s performances, we’ll discuss which blanks got/didn’t get filled in as well as the contestant who took the biggest gamble — by proposing on stage. 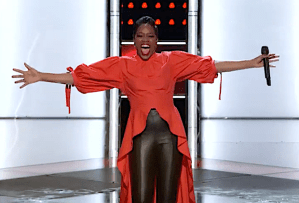 Beth Griffith-Manley (Team Kelly), “Until You Come Back to Me (That’s What I’m Gonna Do)” — Grade: B+ | The daughter of Johnny Griffith of Motown’s Funk Brothers, this 46-year-old former background singer for Anita Baker chose Aretha to cover because her dad had once played piano for the Queen of Soul. But it was also a good song selection as it showcased her range in what sounded like an effortless way. In addition, there was a smooth, silky quality to what Kelly called Beth’s “classic” voice that, perhaps not coincidentally, called to mind Anita Baker. At last a solid contender for the female R&B lane… unless her age works against her with younger viewers.

Selkii (Team Blake), “I Try” — Grade: B | This South African-born charmer — whose name, she explained, “actually means Seal, but it was already taken” — stripped down Macy Gray’s hit and redid it as if it were folk-pop rendered by a Norah Jones with a tangier voice. Kelly marveled, “You don’t sound like anyone on this show.” Which didn’t seem entirely true, though I’d be hard pressed to say who she sounded like. (A slightly raspier Betsy Ade maybe?) Anyway, she has an appealing presence, good range and a strong voice that suggested she could handle country (which likely will come in handy on Team Blake) or the blues as easily as folk-pop. 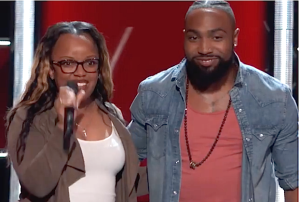 Denton Arnell (Team John), “Hold On, We’re Going Home” — Grade: B- | This 31-year-old Chicagoan revealed before his Blind that he’d brought an engagement ring in order to propose to his girlfriend after his audition. Luckily, he got a chair turn from John (and only John) pretty fast. How much would it have sucked to have been planning to pop the question after getting on The Voice… and then not getting on The Voice? Denton’s voice was solid and sexy as hell, and had a tone to it that really sold his coach. The Drake number he chose didn’t allow him to show off a whole lotta range, but damn, that last run was sweet! Oh, and his significant other accepted his on-stage proposal — even after he accidentally head-butted her. (Oops.)

Ciera Dumas (Team Adam), “Tell Me You Love Me” — Grade: B+ | After revealing in her getting-to-know-you interview that she was as fearless with her hair color as LiLi Joy, Ciera told us that she’d been voted Most Likely to Win The Voice in high school. And based on her Blind, it seemed like it could actually happen. Yeah, the coaches nailed Ciera on getting rattled when she got chair turns, but nonetheless, there was real star power in the way her voice got super raspy when she swung for the high notes. “That’s the money for you,” said Blake. “I felt the pain” in those parts, added John. If only she hadn’t picked Adam to be her coach…

Andrew Sevener (Team Blake), “Honky Tonk Woman” — Grade: B- | This 22-year-old Texan, who’s been playing in a band with his parents since he was 15, didn’t just walk onto that stage, he strutted, and then unleashed a vocal that was freakin’ irresistibly raucous. At times, he definitely seemed like he could’ve used more control over his voice — there was a bum note here and there — but the overall impression he made was “Wow!” As Kelly noted, the sandpapery quality of his vocal was very Pryor Baird. If Andrew can get a better grip on the power his voice possesses, he could be a real force to be reckoned with (maybe even the rocker I’ve been hoping for this season?). 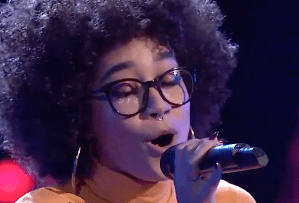 Mari (Team Adam), “Boo’d Up” — Grade: B+ | This 20-year-old’s Blind actually started us off blind, which was a lotta fun when she got a chair turn and we saw that she was this adorable kid dressed like she was part of the Scooby gang. And she was a kid with chops, too, singing alternately with a sweetness and a forcefulness that screamed, “I will not be denied.” She even made me like Ella Mai’s “Boo’d Up,” which hadn’t done anything for me when Lynnea Moorer performed it in Season 15. Another strong female R&B singer — and this one without her age being a potential stumbling block. If only she hadn’t chosen Adam over John as her coach… what was she thinking?

Abby Kasch (Team Kelly), “Here for the Party” — Grade: C+ | The first few notes of this 20-year-old tomboy’s Gretchen Wilson cover sounded so good, you could’ve convinced me that she was lip-synching to an iTunes download. Unfortunately, the rest of her performance wasn’t quite so impressive; she didn’t go as big as I (and maybe the coaches) would’ve hoped on her glory note, and her voice didn’t have the gravel to it that I (and maybe only I?) was hoping to hear. Perhaps that was why Kelly and Blake waited until nearly the end of the number to hit their buttons. Fun performance, and not at all bad, but not so good, either, that I’m convinced she’ll sail through the Battles. 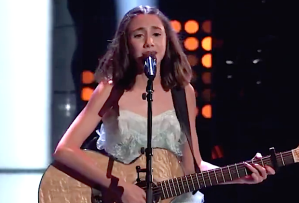 Mikaela Astel (Team Kelly), “Electric Love” — Grade: A- | This 14-year-old from Queens struck me as too young to be trying out… until she opened her mouth. Then holy crap! Ho-ly crap! There was just magic in her voice. She sounded like a pixie singing a siren song or something. “Your tone can’t be taught,” said Kelly, likening the youngster’s sound to Regina Spektor and Julia Michaels’. No lie, her gorgeous, poised performance nearly brought a tear to my cynical, jaded eye. She’s like the anti-Reagan Strange — crazy young but composed and confident.

Anthony Ortiz (Team Adam), “What Makes You Beautiful” — Grade: D | The little bit of this skateboarder’s performance that we were shown hinted that it was a good thing that his coach liked the raw quality of his voice — ’cause he was pretty raw.

Olive Blu (Team John), “On and On” — Grade: C | We only heard a snippet of Olive’s performance, but it suggested that her coach was right; she has a style all her own. It just wasn’t necessarily a style that I thought would take her past the Battles.

Shawn Sounds (Team John), “All My Life” — Grade: A- | This self-described middle-school teacher by day, rock star by night, went viral last year with a video of himself singing in his Houston classroom. (Hey, it woulda kept me awake in class.) On stage, he schooled the competition in what a controlled vocal sounds like. Moreover, his voice was so rich that whenever he did a run, it sounded like warm caramel being stretched. John even called Shawn’s last run the equivalent of a vocal triple axel. Adam described what Shawn had done as painting with his voice. Need I mention that he got a four-chair turn? He also smartly went with John as his coach.

So, who stood out for you on Night 5 of the Blinds? Vote in the poll below, then hit the comments.