Last we saw The Bachelor‘s Colton, he was hopping a fence and running off into the Portuguese night… but did he come back to choose a winner on Monday’s finale?

First, a quick recap: Down to his final three, Colton seemed ready to set his sights on Cassie — until she shared her doubts about getting engaged. (She actually threw the old “I love you, but I’m not in love with you” line at him.) After many tears and “I don’t know”s, Cassie elected to take herself out of the running, leaving Colton with two women (Hannah G. and Tayshia) he didn’t like nearly as much. So naturally, he ripped off his mic, hopped a fence and seemingly ditched the show altogether.

(Now of course, this being The Bachelor, tonight’s finale was ridiculously bloated with inane filler, especially since it’s just Night One of a two-part finale. So let’s skip all the fluff and get the good stuff, shall we?)

We open with Chris Harrison and the producers frantically searching for Colton after his daring leap. (They actually whistle for him, like he’s a dog?) When they finally find him, he tells Chris, “I’m f–king done” before relenting and returning to the hotel. The next day, Colton tells Chris that he did have feelings for the other two women, but “Cassie shut my heart off.” (Kudos to Chris for bringing up the possibility that “she’s just not that into you.”) But, as Chris reminds him, Hannah G. and Tayshia are still there waiting to hear from him. Colton, though, is determined to “fight for someone I love.” And that someone has already said goodbye to him. 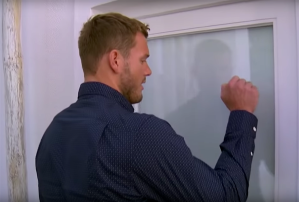 So Colton knocks on Tayshia’s door and pulls her outside for a chat. She sees he’s struggling and gives him a hug — awww! — but he ultimately tells her, “My heart’s with somebody else. I love Cassie.” Tayshia does her best to smile through this, but then she asks to talk to him off-camera. We can still hear them, though, and we hear Colton and then Tayshia sobbing and comforting each other. Before leaving, she tells him she wants “a good guy” like him, and he tells her, “That’s what you deserve.” And she does! #Tayshia4Bachelorette (They also have an awkward live sit-down with Chris Harrison that doesn’t amount to much.)

Now it’s Hannah G.’s turn: The poor girl didn’t even get to go on a fantasy suite date, and she is totally blindsided when Colton shows up at her door. He gives her basically the same “I can’t be in love with two people” speech he gave Tayshia, but adds, “I thought it was going to be you. You still remind me of home.” (???) She presses him for an explanation, but he comes up empty, and when he tells her she makes him better, she sniffs, “That’s what I do. I make everybody better, and they don’t want to stick around.” She finally bursts into tears, and Colton sobs, too: “I don’t want to lose you… I don’t know if I’m making the right decision.” (??? Rip off the Band-Aid, buddy!) He pulls her in for a hug, telling her through tears, “You don’t deserve to be anyone’s backup plan.” After he leaves, he breaks down in sobs before collapsing in the arms of a producer — that wasn’t UnREAL‘s Rachel, was it? — and confessing that “I don’t know if I’m giving up a for-sure thing for something that’s impossible.” 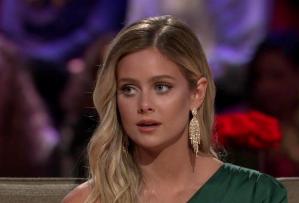 Hannah G. is in the studio, too, and she’s a bit angrier and more confused than Tayshia was. She says she’s not in love with him anymore, either… and good! He dumped you! On national TV! She kind of slams Colton for leading her on, but when she starts asking if he just needed more time, we’re guessing there are still some very strong feelings deep down there on her side. Plus, she had an understandable reaction to Colton telling Cassie that he was thinking about her when he was on dates with the other girls: “That sucked.” But she’s ready to move on, she says: “I want someone to jump a fence for me!”

So we’re left with one Bachelor… and no women. How does this work? Does Colton just go back on Bachelor in Paradise and start from scratch? No, actually, he’s still head over heels for Cassie: “I don’t want to leave here without her.” And Cassie’s still there, actually! We see her still packing up to leave Portugal and saying she “can’t take the pressure” of being his final choice when she’s not ready. But a teary Colton gets into a van to go get her anyway, with a swelling orchestra behind him: “I didn’t fight as hard as I could have to make it work. I’m doing that now.” The last thing we see is him knocking on her door. Will she take him back? Stay tuned…