A familiar (and most unwelcome!) face returned to plunge the Downworld into chaos on Monday’s Shadowhunters, ultimately leading to the death of an important player in the city’s supernatural hierarchy.

The face in question belonged to Heidi, who’s apparently been on the run from the werewolves this entire time. They finally caught up with her this week, but as they learned when she murdered one of their own (R.I.P., Nick!) and escaped in a flash, she wasn’t going down without a fight. And when Heidi’s fellow vampires at the Hotel Dumort refused to help her, she tricked the wolves into attacking them, giving the bloodsuckers a reason to fight back.

Tensions between the two species culminated in an all-out brawl at the Jade Wolf, during which Jordan was stabbed while protecting Maia, and Russell — the pack’s current leader — was killed before their very eyes. (To be fair, Luke had already encouraged Maia to challenge Russell for alpha status, so at least now she won’t have to get her hands dirty. Silver lining?)

Speaking of Maia’s potential future as pack leader, taking on such a big responsibility meant that her personal life (aka Simon) would have to come second. And since he deserves to come first, she had to end what was left of their romantic relationship.

* Clary and Jace got to spend some quality time together, even if it did involve trying to remove the rune bonding her to Jonathan. After attempting to burn it off (at her request!), Jace and Clary retired to the bedroom for a little bump ‘n’ grind. Unfortunately, her subsequent slumber was interrupted by a disturbing message from Jonathan: “I miss you.” (Naturally, he delivered it to her by carving it into his own arm.) 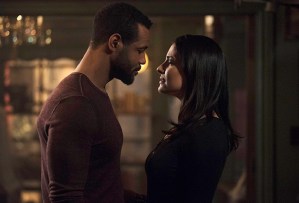 * Luke and Maryse also bonded while investigating the sword that Jonathan tried to recover in Paris, only their time together ended even more uncomfortably than Jace and Clary’s. After cracking the code and opening the warlock’s safe, Luke and Maryse engaged in some serious making out, though it only lasted for a moment before Maryse freaked out and excused herself.

* To be fair, though, Maryse did have somewhere to be. She was meeting with Izzy and Alec, who had troubling news to share: They had an informant with a lead on the rumors about Downworlders being tortured by the Clave, but he had already been attacked when they finally got to him. With his dying breath, he warned them of an off-the-books Clave program that chilled Maryse to the bone.

Your thoughts on this week’s Shadowhunters? Drop ’em in a comment below.