On this Wednesday’s Schooled (ABC, 8:30/7:30c), The Goldbergs star Hayley Orrantia drops by the spinoff so that Erica and her friend Lainey can catch up. And they sure will have much to discuss after Erica drops some unexpected news about her and Geoff’s relationship in TVLine’s exclusive sneak peek.

As viewers of The Goldbergs are aware, Erica and her beau Geoff have been dating for a while. But it seems in 1990-something, the romance has hit a snag. When Lainey laments that her life is “a hot sack of disappointment,” Erica says that things aren’t going any better for her. “But what about you and Geoff?” Lainey asks, to which Erica replies, “Don’t get me started.” Oh no, have the lovebirds broken up?! Or are they just going through a rough patch?

Elsewhere in the episode, “when her high school reunion is held at William Penn, Lainey tries to hide her teaching job from old classmates, pulling a Romy and Michele lie” with the help of Erica and CB, per the official synopsis. “Meanwhile, Mellor’s distraught to learn his star athlete alum, Ruben Amaro Jr., sees Glascott as more of a mentor than Mellor.”

Press PLAY above to watch the video, then scroll down for an exclusive photo from the reunion. 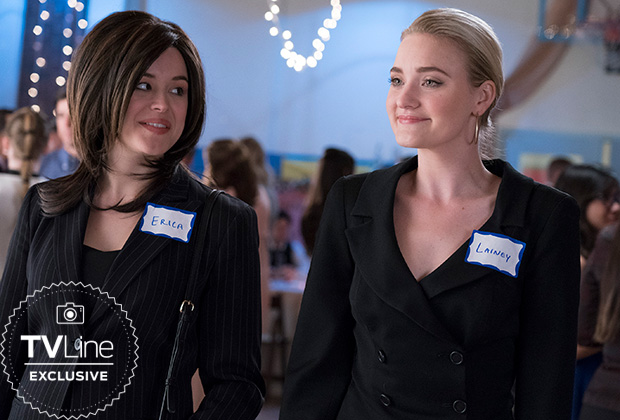