This week on Arrow, Oliver & Co. struggled to play by the SCPD’s rules, Laurel got a lead on Diaz’s killer, and Mia and William searched the dystopian future for a tape player.

With Team Arrow now working alongside the SCPD on a provisional basis, Oliver is determined to make the partnership work, as a way of righting for the new baby wrongs he made in the past, working in the shadows as a vigilante. Alas, their very first case — hunting down the supplier of poison bullets — put the partnership to the test, and the costume-less, toys-less Team Arrow failed, questioning every tactical move and letting the supplier get away amid the confusion. Also, Dinah discovered that her sonic cry is no more, a casualty of lasting nerve damage from her recent throat slitting.

In a bunker refurbished by Felicity (using what money, we always ask…?), Oliver sets out to do things the old way, but Diggle — freshly informed of the hush-hush pregnancy — points out that he’d risk everything turning out the same way, with Oliver behind bars and the city in chaos. Oliver concurs, then invites Dinah over so that he can 1) apologize for flaking out on the SCPD and 2) propose a second chance, with some changes. Meaning, when they then go out to (legally!) chase a new (legally obtained!) lead on the supplier, medical titan James Midas, the team is suited back up and using their favorite weapons, eventually (and legally!) arresting Mayor Pollard’s chum.

In the aftermath, Dinah confesses to the entire team the loss of her cry, then says she has leveraged the mayor to designate Team Arrow as a special vigilante task force. Later, back at home, Felicity and Oliver mull names for their baby, with her liking Lucas for a boy and him proposing Mia (short for Moira) for a girl.

* Laurel was summoned to Slabside by Bronze Tiger, who looped her in on Diaz’s covered-up death and then said that he knows who torched the baddie. In trade, though, if he can’t have the freedom Oliver promised, he wants to at least see his son. (TVLine reader Adrian wonders if “Hawk” grows up to be Connor?) When Laurel comes through on that, a pleased Bronze Tiger reveals that he saw the new Green Arrow walking away from the scene of the murder! Emiko is later confronted by Laurel and taunted with the prospect of Oliver learning his newfound sis is no hero, to which she argued, “What makes you think anyone will believe a word you say, Black Siren?”

* As Felicity worked her magic at the keyboard with a nifty way of searching the city for Midas, Diggle said he sensed she was “onto something bigger” with her security innovations. Dun-dun-dunnnnn! 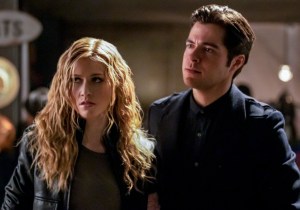 * In the future, William and Mia scoured a grungy bazaar in search of a microcassette recorder. Protracted story short, they found one and played Felicity’s message, which said she was “sorry for everything, mostly for keeping the two of you apart.” She explained that she and Oliver “did it to protect you, because we love you.” But now that William and Mia have found each other, “give these coordinates to team… and then get the hell out of Star City. And whatever you do, don’t come looking for me” — which the kids immediately agree they will do anyway. Mia recognizes the coordinates (as anyone would, right?), then declares, “We’re going over the wall — to The Glades.”

What did you think of the episode “Training Day”?