The new Starz comedy Now Apocalypse, premiering tonight at 9/8c, sets out to confirm something you’ve likely always suspected: “there are aliens in the Los Angeles dating scene.” It’s a perfectly viable theory, even if the show’s free-spirited protagonist Ulysses (played by Twisted‘s Avan Jogia) might not be the most reliable narrator. “Stoned and paranoid” is pretty much his default mode. 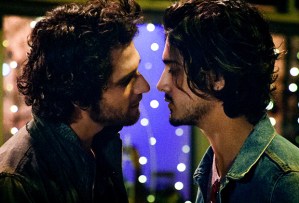 “He’s a sexual astronaut, he’s exploring,” Jogia tells TVLine. “Sexuality is a spectrum, and he moves around it. He definitely has the realms in which he’s most comfortable, but he’s also down to try new stuff out. I like playing a character that’s asking a different question about sexuality, even blurring of the lines of sexuality. It’s not so cut and dry. We can explore many things all at the same time. There aren’t enough characters doing that in movies or on TV.”

From Gregg Araki and Karley Sciortino, Now Apocalypse explores the damage that apps like Grindr and Tindr have inflicted on LA’s already fragile dating scene. So it’s only fitting that Ulysses’ journey down the extraterrestrial rabbit hole begins when he meets Gabriel (Teen Wolf‘s Tyler Posey) through one such app. It’s a fateful meeting that leads to… other fateful events. Some of which don’t include pants. 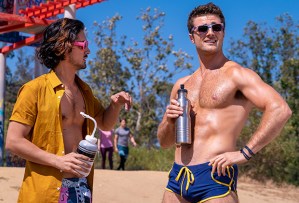 But Ulysses and Gabriel are hardly the only characters contributing to the show’s sexual abundance. Aspiring filmmaker/perfect specimen Ford (Awkward‘s Beau Mirchoff) is constantly in various states of undress with and without his girlfriend Severine (Roxane Mesquida). There’s also their friend Carly (former Disney Channel star Kelli Berglund), whose fearless ownership of her sexuality yields its own share of enticing discoveries.

“All of the sexuality on the show is joyful and celebrated and everyone has agency,” Jogia says. “There’s no darkness to the sexuality. We explore sexuality as a positive, not as this guilt-ridden threat that I think so much of American television and American cinema has. I was happy to be a part of a show that doesn’t use sexuality for anything other than positivity and joy.”

As for the show’s big alien mystery, Jogia can’t say too much, but he promises “answers… that will lead to more questions.” Fortunately, you’ll have plenty of gifs to enjoy while you wait.

Hit PLAY on Now Apocalypse‘s trailer below, then drop a comment: Will you be joining Ulysses on his journey?