Next up in our Keep or Cut series is a revival of a classic CBS sitcom. 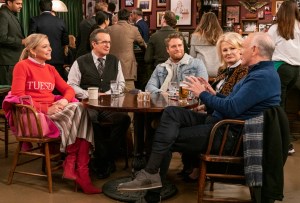 THE CASE FOR KEEPING | It’s nice to see the old FYI gang back together again, and Emmy-winning star Candice Bergen can still deliver a punchline like no one else, even after a two-decade layoff. The revival doesn’t shy away from addressing our divisive political era, from climate change to immigration to freedom of the press, and the current administration certainly gives them plenty of headlines to latch onto. Plus, the new cast members have injected a fresh vitality into the series, especially Jake McDorman as Murphy’s son Avery (their heart-to-hearts are a highlight of the revival) and Nik Dodani as social media guru Pat, who quickly established a fun rapport with eternally neurotic producer Miles.

THE CASE FOR CUTTING | The ratings news isn’t great: After debuting to a 1.1 demo rating, Murphy went fractional just three weeks in. Over its 13-episode revival run, it averaged a 0.84 in the demo — ranking last among CBS’ eight sitcoms — and 6.1 million total viewers, where it outdraws Fam, Man With a Plan and Happy Together. (The veteran cast surely didn’t come cheap, so CBS can’t be happy to keep shelling out big bucks for its lowest-rated comedy.) Creatively, the revival is so retro, it’s almost corny at times, with groan-worthy gags about Murphy’s aversion to modern technology and ham-fisted jabs at President Trump that would’ve felt stale a year ago. And despite all those jabs, the revived Murphy generated a dismally low level of buzz during its fall run. (Not even one angry Trump tweet.)

Vote below, then state your own case for keeping or cutting Murphy Brown.