Early on in FX’s terrific new comedy What We Do in the Shadows, we overhear what sounds like a typical argument between roommates about leaving food out too long. Only these roommates are also vampires, and instead of a jug of milk left out on the counter, they’re fighting about a human half-drained of his blood. (“Finish a whole victim before moving onto the next one,” one vampire chides the others. “It’s not hygienic!”) It’s this grandly goofy collision of the supernatural and the mundane that makes Shadows such a giddy joy to watch — and maybe the funniest new show of the year so far. 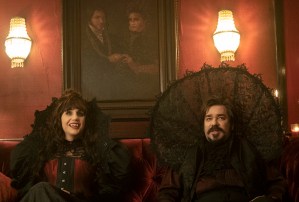 Shadows — premiering Wednesday, March 27 at 10/9c; I’ve seen the first four — follows a trio of centuries-old vampires who now live in not-so-glamorous Staten Island. (“It is where the boat dropped us off,” female vamp Nadja, played by Natasia Demetriou, sighs.) They’re joined by cheerfully servile human Guillermo (Harvey Guillén), who accompanies vampire Nandor (Kayvan Novak) everywhere as his “familiar,” which is “like being a best friend… but also a slave,” he admits. The show is fully aware of how ridiculous all of this is, gleefully taking the sexy stuffing out of the usual vampire tropes and shining the spotlight instead on everyday chores and pointless bickering. Sure, these vampires still suck blood and make passionate love… but they have to buy groceries and take out the trash, too.

FX’s series is based on the 2014 indie comedy of the same name starring Flight of the Conchords‘ Jemaine Clement and Thor: Ragnarok director Taika Waititi, and they both return here as executive producers, managing to scoop fresh laughs out of the tired mockumentary format. (The vampires’ confessionals are spiced up by cuts to ancient scrolls and paintings of vampires, illustrating their wild tales.) Thanks to Clement and Waititi’s expert guidance, Shadows‘ early episodes are chock full of quotable one-liners and majestically silly moments: You’ll never look at crepe paper the same way again after Nandor’s trip to the supermarket. 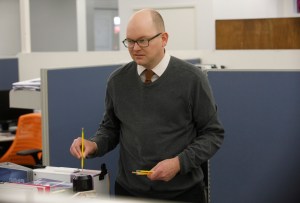 The cast is bursting with gems, too. I must confess I’ve never seen Novak, Guillén or Demetriou in anything before, but they’re all superb, nailing the show’s bone-dry comedic tone right away. (Demetriou’s Nadja, in particular, is a lusty, droll delight.) British comedy staple Matt Berry (The Mighty Boosh, The IT Crowd) is fantastic as pompous vamp Laszlo, who’s more likely to brag about his sexual conquests than clean up after himself. And the addition of a fourth vampire to the house — lethally dull office drone/”energy vampire” Colin (Better Call Saul‘s Mark Proksch) — is an absolute stroke of genius; the scenes of him feeding on his co-workers by trapping them in boring conversations are a scream. (And incredibly relatable.)

Shadows has such a precise, goofy sense of humor that it might not click for everyone. These vampires do feast on the living, so the very squeamish may have to cover their eyes at times. (The special effects of vampires levitating and turning into bats are quite low-tech, but charmingly so.) Plus, a full decade after Twilight, perhaps it’s a bit late to be parodying the vampire craze — but who cares when the end result is this funny? I ended up watching the series premiere three times… and still found myself laughing the third time through. Maybe it’s hypnosis, but I’m now fully under Shadows‘ spell.

THE TVLINE BOTTOM LINE: What We Do in the Shadows finds lots of laughs in the everyday lives of vampires, with a perfectly bone-dry tone and superb cast.