Max Evans is about to have a close encounter of the maternal kind. Desperate to uncover the origins of the alien symbol, Max turns to his adoptive mother Ann (played by Claudia Black) for guidance on Tuesday’s episode of Roswell, New Mexico (The CW, 9/8c), and TVLine has an exclusive first look at their emotional sit-down.

Though Black has appeared on a wide variety of genre series — from Stargate SG-1 and Farscape to Hercules: The Legendary Journeys and Xena: Warrior Princess — her appearance on Roswell is especially exciting, as it reunites her with her Originals co-star Nathan Parsons. (At least we know she won’t kill his friend and try to steal his wife’s baby this time around.)

Elsewhere in the episode, “with Isobel’s life hanging in the balance, Liz and Michael frantically search for a way to help her,” per the network’s official synopsis. Meanwhile, “Alex turns the tables on Sergeant Manes.

TVLine recently asked its readers whether the not-yet-renewed CW drama should return for a second season, with an overwhelming majority voting to keep the otherworldly series in rotation. (Take note, Mark Pedowitz.)

Check out another exclusive first look at Mama Evans’ debut below, then drop a comment with your thoughts on all things Roswell, New Mexico. 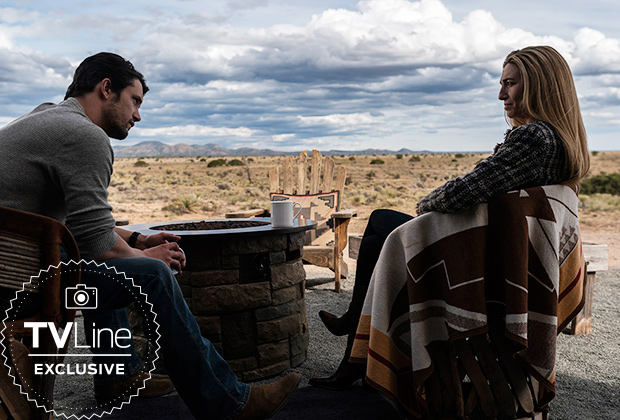