As the retro title font and intro music promised, this week’s Star Trek: Discovery took us where… well, quite a few of us have gone before.

Before Thursday’s episode, we got a “previously on” that must have set a new TV record for time spanned since it originally aired — 53 years! — reminding us of the events of the original Star Trek series’ “The Menagerie”: Captain Pike and Spock visited Talos IV, where they encountered a stranded human named Vina and a bunch of big-headed telepathic aliens known as Talosians. Pike feared the Talosians were trying to control his mind, and that Vina was just an illusion, so he escaped, but Vina stayed behind. That was the last we saw of them… until now.

Burnham is piloting a shuttle towards Talos IV, after deciphering Spock’s mutterings, and once on the surface, encounters the same blue-leafed plants Pike and Spock did in “The Menagerie.” She also sees a beautiful young woman stroll onto the parked shuttle: It’s Vina — hi, Melissa George! — who remembers Spock and calls herself “an old friend” of Pike’s. She takes them to meet the Talosians and reveals that her beauty is an illusion: She was badly disfigured in the crash that left her on Talos IV. The Talosians offer to help Spock, but they’ll need to dig into his memories — and Burnham’s, of the time she pushed him away years ago. 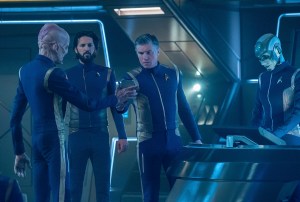 Back on the Discovery, Pike is still looking for Burnham and Spock, and gets an emotional visit from his former flame Vina. (Side note: How great has Anson Mount been this season?) It’s only a projection, though, and Burnham and Spock join her to explain where they’ve been, and why he needs to get there quick. Meanwhile, the Talosians’ deep dive into Spock’s memories reveals that Spock only Vulcan neck-pinched that doctor, he didn’t murder her; that he believes the Red Angel is a human time-traveler (!) who is coming back from the future to try and prevent nothing less than the eradication of all life as we know it (!!); and that young Burnham had to turn cruel to push Spock away, calling him a “weird little half-breed” before she ran off. (Ouch.)

The Discovery tries to head to Talos IV, but the spore drive is mysteriously sabotaged — did you notice android crew member Airiam’s eyes flashing red? — so they’re forced to go the old-fashioned way and end up attracting the attention of Section 31 and Captain Leland. The two ships get into a transporter tug-of-war that threatens to tear Burnham and Spock to shreds, until Vina materializes to tell Pike, “Let your friends go.” He relents, and Leland beams Burnham and Spock aboard. Or he thinks he does: They’re just Talosian projections, and the real Burnham and Spock are actually in a shuttle headed to the Discovery. Spock reunites with Pike… and even cracks a smile. (Or the Vulcan version of one, anyway.) Pike and the newly reassembled Discovery crew end the episode by defying Starfleet orders and making a run for it.

How’d you like Discovery‘s blast from the past? Beam down to the comments to share your thoughts on tonight’s episode.