Thursday’s episode of RuPaul’s Drag Race tested the remaining queens’ ability to pull focus from their fellow sisters. (Or should I say cyst-ers?)

First up, Brooke Lynn Heights and Silky Nutmeg Ganache won this week’s mini challenge — Ru’s beloved celebrity photobomb-off — by getting naked with Tom Brady and dropping a hot turd on the Trumps, which doesn’t even crack the top 10 if we’re talking about the most shameless things a queen has done on this show.

Next came the maxi challenge, a double feature of instant classics: Good God, Girl, Get Out (cast by Silky) and Why It Gotta Be Black, Panther? (cast by Brooke Lynn). Naturally, Ross Mathews and Michelle Visage were called in to direct, and they… well, let’s just say they had a wide range of talents to work with.

A few of the queens managed to turn it out, but for the most part, both movies were flops. Brooke Lynn discovered that she’s basically allergic to landing puns (“Beyon-say what?“), Vanjie’s attempt at playing “nerdy” somehow came out sounding like Cookie Monster, and Ra’Jah O’Hara was so confident in her own terrible performance that she literally waved a flag in surrender. The real winners of this challenge were the show’s editors for attempting to make something out of these utter disasters. (I’m not saying they succeeded, but at least they tried.)

The truth is, there was a far more entertaining drama unfolding behind the scenes of these certified motion pictures. Thanks to a little pot-stirring from Mama Ru, Silky learned that some of the girls called her “obnoxious” and said she “sucks the air out of the room.” But when Silky confronted her fellow queens in the workroom, only Ariel Versace was brave enough to admit what she done did. (“I knew it was you, bitch!” Silky replied.) Frankly, I respect Ariel a little bit more after that — which is a major step up from not even knowing she existed last week. 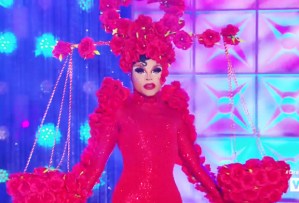 This week’s runway category was “What’s Your Sign?” though it might as well have been “glittery sheep and ugly fish,” because that’s pretty much all we got. I actually thought that Vanjie’s Libra look — an all-flower gown, complete with oversized flower scales — was one of the most intriguing, and I was surprised to see her sashay back to the Untucked lounge with the rest of the “safe” squad.

Scarlet Envy and Yvie Oddly were named this week’s dual maxi-challenge winners, paving the way for a lip sync battle between Kahanna Montrese (again!) and Mercedes Iman Diamond to the tune of Britney Spears’ “Work Bitch.” I was actually really impressed with both of their performances; Mercedes came to life before my very eyes (that back bend!), and Kahanna practically gave us an entire Olympic floor routine. In the end, however, Kahanna was sent sashaying away.

Your thoughts on Kahanna’s elimination? The entire workroom’s apparent desire to murder Silky? Whatever’s on your mind, drop it in a comment below.