Either way, there’s a lot at stake: Will Zoey have to pay the ultimate price for cheating on her chemistry final? And will Ana finally tell her the truth about Aaron?

TVLine hit up Francia Raisa for answers, and while she wasn’t about to spoil the episode’s biggest surprises, she had a lot to say about Ana and Aaron’s soon-to-be-public relationship — including why she doesn’t technically support it in real life.

TVLINE | Zoey’s cheating scandal bought Ana some more time. Is she relieved?
I would say yes and no. Yes, it’s a relief, because she knows there are going to be repercussions from it. So now she has one more day to keep it to herself and avoid causing trouble. Even though Zoey said it wasn’t like [she and Aaron] were in love, something in Ana still feels like it’s wrong. Why else would she have such a hard time telling her, you know? But she’s also having fun because they’re sneaking around. It’s both.

TVLINE | Do you think Ana is overthinking this whole situation? Like, maybe it won’t be such a big deal?
If you’re asking as Francia, I would have never messed around with anyone my friends ever even liked. Back when I was single, even if a friend thought a guy was cute, I backed off. So I have my own feelings about what Ana is doing, but I also understand that she’s very young. She feels seen by Aaron at the moment, and that’s clouding her judgment. She felt like an outsider before, and now someone likes her. It’s really exciting. So I don’t think she’s overthinking it, because a part of her knows she shouldn’t be doing this. 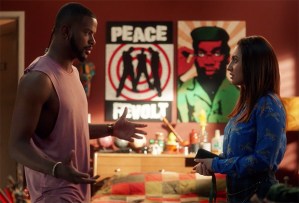 TVLINE | Ana and Aaron’s relationship really has grown over time. How do you feel about their development as a couple?
It’s interesting because, as Francia watching it, I’m like, “Ana, what are you doing? Your friend liked him. And he was kissing another girl in front of her when she still liked him!” All of these things go through my head. But for the character, I think it’s a fun little college romance. It’s a nice way for her to grow up and open her mind to things. She’s now attracted to someone who’s the complete opposite of her with such different beliefs. As a woman, regardless of how long this relationship lasts, it’s going to make her more openminded.

TVLINE | I love that you’re critical about your character’s decisions and you don’t just let her off easy.
Oh, all of the girls and I are very involved. When Zoey was deciding which of the guys she wanted to be with, we had a big text debate with each other. I screenshotted it and sent it to [creator Kenya Barris]. I was like, “This is how the story should go.”

TVLINE | Lastly, how worried should we be about Zoey getting in trouble?
There are severe consequences for cheating in anything — school, relationships, friendships. Even though Zoey gets away with a lot, this is something really serious. You’ll see some repercussions for sure.

Your thoughts on the Aaron/Ana situation? Drop ’em in a comment below.