Prepare thyself for the end times!

Amazon on Wednesday released the first full-length trailer for its anticipated limited series Good Omens, which is set to bow with all six episodes on Friday, May 31.

Good Omens takes place in 2018, when the Apocalypse is near and Final Judgment is set to descend upon humanity. The armies of Good and Evil are amassing, Atlantis is rising, and tempers are flaring. Everything appears to be going according to Divine Plan. However, Aziraphale (played by Masters of Sex‘s Michael Sheen), a somewhat fussy angel, and Crowley, a fast-living demon (Doctor Who‘s David Tennant) — both of whom have lived amongst Earth’s mortals since The Beginning and have grown rather fond of the lifestyle — are not actually looking forward to the coming war. 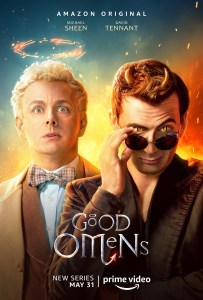 In the above trailer, Crowley warns Aziraphale that armageddon is just days away, and they’ll have to work together to track down the Antichrist, an 11-year-old boy unaware that he is meant to bring upon the end of days.

As previously reported, Benedict Cumberbatch (Sherlock) will lend his voice to the show’s animated Satan. Meanwhile, Brian Cox (Succession) will serve as the voice of Death.

Press PLAY on the trailer above, then hit the comments and tell us if you plan to add Good Omens to your Prime Video queue.