In his first interview since Lifetime’s damning docuseries aired, R. Kelly “had a lot to get off his chest… and boy did we let him speak,” Gayle King said at the top of Wednesday’s CBS This Morning.

Yet no matter how hot things got, King stayed cucumber-cool. No matter how absurd Kelly’s words became, his interviewer stifled the spit take with which any lesser person would react.

“It wouldn’t do any good if we both got emotional,” King later told cohosts of her approach to the one-on-one with Kelly, who has pleaded not guilty to 10 counts of aggravated criminal sexual abuse (allegedly sometimes with minors). The full Q&A ran nearly 80 minutes but thankfully is being meted out bit by bit over two This Mornings this week.

Here are some of King’s best moments as a journalist — and/or as a person — during the first segments to be released. 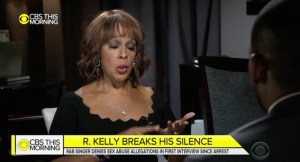 BY THE NUMBERS | When Kelly claimed early on that all of his accusers are lying, King tallied the multiple details on which all of them agree. “Why would these women say the same thing” about Kelly dictating when they ate, when they could go to the bathroom, when they could sleep — “and they don’t know each other!” she marveled. “That defies logic to me.”

ON THE NO’S…. | Setting aside the abuse angle for a moment, King plainly asked, “Have you ever had sex with anyone under the age of 17?” Kelly responded with a series of no’s, but King couldn’t silence the beeping of her B.S. meter. “I have to tell you, it’s so hard to believe that, based on all that we’ve read and what the women said about you.” 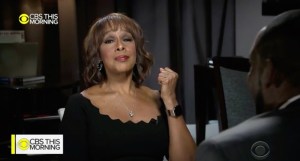 ASK ME NO QUESTIONS, I’LL TELL YOU NO LIES | Given his self-described “crazy past,” Kelly asked aloud, “How stupid would I have to be?” to prey on and hold young women against their will, and so sloppily at that. King’s Jim Halpert-like glance at the camera answered that question. Her clenched hand seemed to be saying, “Give me the power not to answer him.” 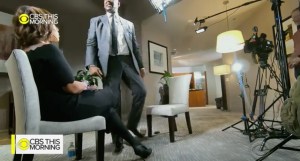 STAND-UP GUY | When Kelly launched into his now-infamous, meme-worthy rant about how his life is being destroyed by these allegations — rising from his seat and taking steps toward his interviewer while swinging his arms — King didn’t flinch. Hell, she barely recognized his act of bravado. Instead, she sat as she always had, calmly cuing “Robert… Robert…” to calm down. Which he eventually did, with the help of his nearby publicist. 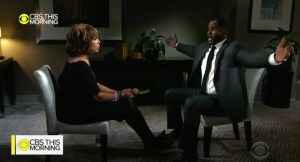 HELP ME HELP YOU | In the wake of that explosive moment, in a subtle notable change of body language, King actually leaned forward into her interview subject, presumably to establish a more intimate, and thus calming, dynamic. Versus wild ranting, “We need to have a conversation,” she quietly said, asking,”What kind of help [do you need]?”

BLAME GAME | When Kelly suggested that he has been the target of betrayal after betrayal, all because his “heart is so big,” King wasn’t having it. “It sounds like you’re playing the victim here,” she scoffed, once again reading our minds.

PUTTING THE AGE IN RAGE | Revisiting the topic of sex with minors — er, sorry, “much younger” women — Kelly argued, “I don’t look at ‘much younger,’ I look at ‘legal'” — a delineation that surely had King, like us, silently throwing up a bit inside. And yet she kept her expression plain. 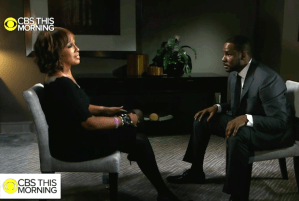 ALL IN THE FAMILY | King perhaps registered no more conspicuous combo of disbelief and disgust than when Kelly posited that the two young women currently in his life(/possession?) were not taken from their families but given to him, one by a groupie father. “You’re saying the parents handed their daughters… over to you…? Is that what you’re saying to us?” And yes, that is what he was saying.

What did you think of King’s A-plus job in interviewing Kelly?