American Idol set expectations unusually high on Wednesday with Ryan Seacrest promising “some of the most spectacular talent we’ve ever heard,” including — wait for it — the “greatest audition Idol has ever seen.”

As for whether Idol made good on that promise… honestly, who’s to say? This show has been on for so long that there are literally contestants whose parents have auditioned at one point. I’m not about to sift through 17-ish years worth of auditions just to prove Seacrest wrong. Not anymore.

In any event, the first part of his promise absolutely came true. This episode introduced us to some phenomenally talented singers, including one Katy Perry already predicts will land in the season’s top 10. Let’s break down Wednesday’s most memorable auditions, shall we?

COURTNEY PENRY, 25 | According to Wednesday’s first contestant, we’re supposed to remember her as “the crazy chicken girl in love with Ryan Seacrest,” but considering that description applies to about half of the people who audition for this show, I think we all deserve a pass. Anyway, Courtney admitted that she wasn’t “vocally, mentally or emotionally” ready during her first go-round, but she proved just how much she’s grown with a (literal) boot-stompin’ performance of Chris Stapleton’s “Parachute.” It wasn’t bad, but it was… a lot. Fortunately, the judges asked her to follow that up with something a little less “extra” — in this case, Little Big Town’s “Girl Crush” — and Courtney knocked it out of the park, earning herself a golden ticket. 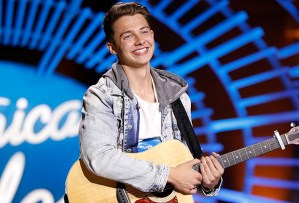 LOGAN JOHNSON, 20 | I’m not sure why Luke Bryan said that Logan gave him Justin Timberlake vibes, but I’ll add my voice to the chorus of praise lavished on this inspiring young gentleman from Idaho. Logan’s video package was all about overcoming his addiction to painkillers, something that took a serious toll on his family. Even if I hadn’t just watched Logan’s mother cry her eyes out and say “We need a win,” I’d still have rooted for him — and he did not let me down. There was so much heart in his performance of Demi Lovato’s “Sober.” It also kind of sounded like Shawn Mendes doing a Demi song, which is right up my alley. (No? Did I imagine that?)

EDDIE ISLAND, 25 | No offense to the great English poet John Donne, but this contestant — who moved to Nashville to attend a Paramore concert and just… stayed there? — changed his name to reflect the realization that everyone is, in fact, an island. He also has googly eyes on his guitar, which immediately endeared him to Katy. (Their connection gave me serious “wig” flashbacks, which led me down a brief Noah Davis rabbit hole. Do we think he really got to keep that alpaca?) Anyway, this little hippie angel performed all kinds of vocal tricks as he impressed the judges with an original ditty. I loved his falsetto, as well as the little quiver in his voice. Luke Bryan put it best when he told Eddie, “I think you have to be in our life.” (No comment on why Luke called him a “little turd,” though. I don’t know what that was about.)

KASON LESTER, 28 | Goodness, this Tennessee-bred strawberry farmer checked off just about every one of my boxes. Boxes I didn’t even know I had. Boxes like “strawberry farmer!” (But what can I say? I’m a sucker for anyone who shows up with snacks.) Katy declared Kason to have Top 10 potential after listening to his performance of Chris Janson’s “Holding Her,” even if Luke didn’t find Kason’s guitar work to be “convincing” enough. (Whatever, Luke, keep clipping your toenails on the table, ya nasty.)

BETSY JO, 21 | We only got to spend a brief moment with this firecracker, but what a glorious moment it was. That power! Those runs! When Betsy’s hat fell off mid-performance, Katy wanted to throw money in it, and when she realized she didn’t have any cash on her, she actually Venmoed Betsy $20. Venmo! Betsy also seemed to have a really fun personality, so I hope we get to spend a more time with her.

KARLI RYAN, 17 | Um, I’d actually like to have a word with the judges about this next one. The Florida teen — a daughter of an Idol superfan who also auditioned for the show back in the day — blew me away with a songwriting ability beyond her years and the kind of innocent voice that just about breaks your heart. At the very least, she wrote the best song with the lyrics “there’s a cardboard box from Amazon Prime” that I have ever heard. When the judges began to express their uncertainty, I figured they were merely drawing things out for dramatic effect. After all, this girl was a shoo-in, right? … Right?! Apparently not, as the judges sent her sobbing to her mother in the hallway. Katy told her fellow judges, “We did the right thing,” but I’m not so sure. 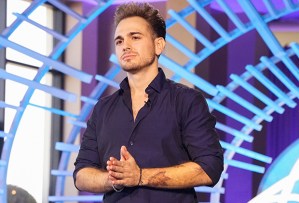 JUAN PABLO, 26 | Fortunately, the judges got it right with Juan Pablo, whose audition was so good, Luke said he needed a cigarette afterwards. Sure, his take on “Besame Mucho” was the most needlessly over-the-top performance I’ve seen since Will Ferrell and Kristen Wiig did that Lifetime movie about an evil surrogate, but there was no denying the authenticity and intensity of his voice. He even gave Luke some unsolicited career advice, suggesting that they team up on a Spanglish, “Despacito”-esque track. (But based on the Spanish accent Luke attempted after Juan Pablo left the room, I’m thinking that might actually be a terrible idea.)

SHAYY, 17 | The past year has been a struggle for this Virginia teenager, who’s now legally blind after doctors removed half of a tumor from her brain. And adjusting to her new normal has been made even more difficult by some of the kids at her school, who take pleasure in pushing her and kicking her cane. It’s a hardship that no one should have to endure, and I have endless admiration for the strength and courage she summons on a daily basis. I was already getting choked up when she told the judges that she’d be singing Andra Day’s “Rise Up,” and I only got messier from there, as did the judges. Just as Luke said, it’s like she opened up her soul and the song just poured out. It was powerful and inspirational, and I felt like those high notes pierced my heart. Lionel Richie couldn’t let her go without giving out one of his coveted hugs.

LANDEN KNOWLTON, 23 | After loosening himself up by putting through the judges through a mini boot camp, this military sergeant — who said that auditioning for American Idol scares him more than being deployed overseas — delivered a genuine, beautiful performance of NeedtoBreathe’s “Washed by the Water.” Still, the judges are hoping he loosens up even more in Hollywood.

ETHAN PAYNE, 15 | OK, this was really cute. Ethan, who was diagnosed with cystic fibrosis as a baby, has already met Luke once before through Make-a-Wish. He got to join Luke on stage at one of his concerts, and Luke even gifted him one of his old guitars. Ethan had that same guitar in hand tonight when he entered the audition room, where he got to perform with his favorite country singer once again. I still can’t believe how mature this kid’s voice is for his age.

KIMBERLY & BERNIE | I really don’t have much to say about this pair of Disney doodles, except… damn, Katy’s impression of Gus from Cinderella was frighteningly accurate. 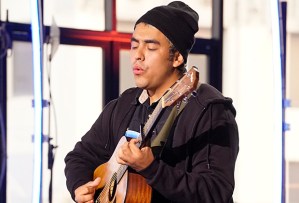 ALEJANDRO ARANDA, 24 | Naturally, the show saved its best audition — or should I say “the greatest audition Idol has ever seen!” — for last. Easily the most unassuming contestant we saw tonight, this self-taught California crooner took the judges by surprise with a studio-ready original song called “Out Loud.” With mind-blowing guitar skills and a voice to match, Alejandro had the entire room speechless. No, really. “I have nothing to tell you, other than I’m so glad that you’re here,” Luke said, adding that he felt like he was “in the presence of greatness.” Lionel enjoyed him so much that he asked Alejandro to play a second song on the piano, which he also nailed. It was like he became a completely different, equally talented person. I’m obsessed.

Which audition(s) did you enjoy the most in the second night of Season 17? Pick up to three in our poll below, then drop a comment with your thoughts on Wednesday’s episode.