It’s nice to see Idris Elba smiling, isn’t it? After years of brooding as haunted detective John Luther on the BBC America cop drama Luther, the reigning Sexiest Man Alive is lightening things up with a comedy. Elba is easily the best thing about his new Netflix series Turn Up Charlie — debuting Friday, March 15 on the streamer; I’ve seen the first three episodes — a thoroughly mild, easily digestible sitcom that unfortunately dips into Disney Channel levels of saccharine too often to merit a recommendation. It’s a hard show to hate, but without Elba to anchor it, it’d be so lightweight, it’d disintegrate in the air like a dandelion. 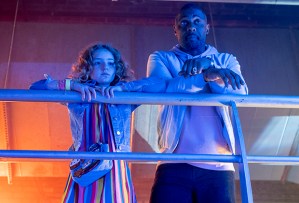 Elba stars as Charlie, a former one-hit-wonder who’s now a middling DJ (he plays weddings, not massive outdoor festivals) and confirmed bachelor. When Charlie reconnects with his movie star pal David (TURN: Washington’s Spies alum JJ Feild), he thinks David’s ultra-successful music producer wife Sara (Covert Affairs‘ Piper Perabo) might be able to help him revive his music career. Actually, David and Sara do have a business proposition for him: They offer him a job looking after their bratty daughter Gabby (newcomer Frankie Hervey). Gabby is a terror, blessed with a huge vocabulary and a frightening amount of self-confidence. “Do you know how long, on average, it takes me to make a nanny quit?” she asks Charlie early on. (Spoiler alert: It’s not very long.)

Elba has charm to spare, of course, and it’s a pleasure to see him loosen up a little and have fun here as the easy-going Charlie. Plus, veteran comedy director Tristam Shapeero (Community, Unbreakable Kimmy Schmidt) lends the show an endearingly goofy, rough-edged vibe. But all their efforts are misspent on a thinly drawn premise that shoots for heartwarming and lands somewhere closer to corny. Turn Up Charlie ends up playing like an only slightly more sophisticated version of The Manny, the fictional sitcom that This Is Us‘ Kevin quit on in the pilot… because it was so brainless. 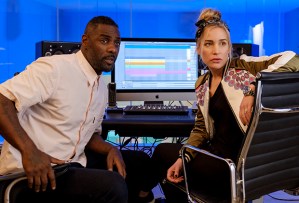 The predictable antics of Charlie chasing after a misbehaving child wear thin quickly, as does Gabby’s pouting after being ditched by her parents yet again, and the jokes aren’t sharp enough to cut through all the schmaltz. (Elba only has himself to blame; he’s credited as a co-creator here.) It also drags noticeably when Elba’s not on screen. Gabby’s mom and dad are repeatedly shown to be such terrible, unconcerned parents that it’s hard to connect with them as characters, and Charlie’s home life, with an overbearing aunt for a landlord and a slacker roommate, feels like a remnant from a different, much broader sitcom.

Elba’s presence, along with the cast’s British accents, probably help to raise this a full letter grade in my estimation. (It’s just fun to listen to Elba say stuff like “fing” instead of “thing.”) But it’d be a lot more appealing if they ditched the cutesy “manny” angle and just followed Charlie’s life without the kid. (His dating life takes a backseat in the early episodes… and who doesn’t want to see Idris Elba on a date?) Really, I’d watch Elba in just about anything — but Turn Up Charlie does test that proposition to its very limits.

THE TVLINE BOTTOM LINE: It’s nice to see Idris Elba doing comedy, but Netflix’s Turn Up Charlie is too thinly drawn and corny to be a worthy showcase.