This week on The Flash, Cisco delivered a finished metahuman cure. But yes, there was a “but…,” in that they now needed someone on whom to test it.

After Sherloque noted that any local metas had either been killed by Cicada or left Dodge, the idea arose of seeing if an Earth-Two meta, King Shark, might want to volunteer. Lyla led the team to a pier where new-ish ARGUS hire Tanya Lamden aka widow of Earth-One’s Shay Lamden was communicating with King Shark via a new bit of tech she dubbed the “crown.” Keen on Team Flash’s idea of turning shark back into a Shay, Tanya reeled in her dead husband’s doppelganger. But once he splashed onto the dock, he went berserk, whipped off his crown, clocked Barry and escaped into the water.

Using Cisco’s MAD 2.0 to supercharge the crown, the team went fishing for King Shark again. This time, Nora slapped back on the crown, but King Shark still was untamed enough to grab Cisco. Before he could get his jaws on Cisco, Barry leaped up and jabbed King Shark with the cure. Moments after King Shark tottered into the water, a transformed Shay Lamden (played by Dan Payne, not of Highlander) emerged. While Shay made clear how happy he was to be human again — while taking full blame for any havoc he wrought — Cisco and Caitlin had some angry words for Barry, who despite affirmations otherwise never gave Shay a choice to take the cure. Barry argued that he was simply doing what he had to to save Cisco’s life, but his friend had to wonder if Barry ever intended to give Shay the option or not.

A bit later, just as Cisco and Caitlin deduced why King Shark went berserk earlier — there was a severe brainwave disruption — Barry came to apologize for earlier. He was met with a swinging fist from Cisco, and then an icy blast from Caitlin, both of whom were under the thrall of Grodd, who was there to grab and make off with the crown. Lyla later explained that Grodd launched his ARGUS escape plan during the Enlightenment, when a brief power outage allowed him to control the mind of a guard. 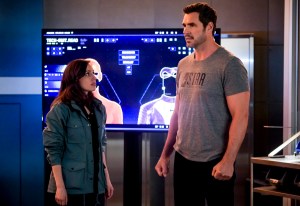 With Grodd planning to use the supercharged crown to mind-control all of Central City, Barry and Nora teamed up for a run at the great ape, but wound up clobbered and then whammied by his mind control. Back at STAR Labs, Shay offered to turn back into King Shark to best Grodd and save the city, as a mea culpa for all the harm he did in the past — even though it meant cutting short the kindling of a proper human-on-human romance with Tanya. One zap from Cisco later and King Shark was ready to bait Grodd for a fight. The sentient gorilla gained the upper hand and hung King Shark upside-down and powerless from a crane. When Caitlin pointed out that [one science lesson later] a blast of electricity might power King Shark back up, Barry and Nora delivered it, after which King Shark whaled on Grodd good.

In the aftermath, Lyla reported that Grodd has been placed in a medically induced coma, where his mental powers can’t activate. Barry then apologized anew to Cisco and Caitlin, vowing to never force the cure upon someone again. So who should be their next volunteer? Noting that people can often surprise us, Barry suggested: How about we offer it to Cicada? 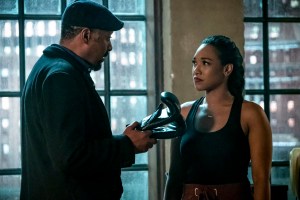 Elsewhere in the episode: Joe West returned from his prolonged visit with Wally! He was delighted to hear that Iris had set up shop in her own office, to launch the Citizen… yet couldn’t help but notice that she was steering clear of the place where she had been repeatedly terrorized by Cicada in the time loop episode. Joe taught Iris how to reclaim her power by going a few rounds with a punching bag set up at the SCPD lab, after which she confidently returned to her office… and caught up on the “King Shark versus Grodd?!?!?” news.

What did you think of “King Shark vs. Gorilla Grodd”?