Next up is a romantic comedy about divorce from which we may be forced to separate.

THE CASE FOR KEEPING | The sophomore season of this romcom from Emily Kapnek (Suburgatory) has been as sweet and swoon-worthy as its freshman run — and delivered on its promise of a new beginning for Lena (played by Jenna Fischer) and Martin (Oliver Hudson), the meant-for-each-other couple that didn’t learn how to be married until they began coparenting after deciding to divorce. In fact, the duo managed to get it so together that it didn’t seem like they would go back to taking turns sleeping in the garage even after they found out that his interim girlfriend had delivered the kids’ half sister. (Lena went so far as to cook and clean for the exhausted new mom!) 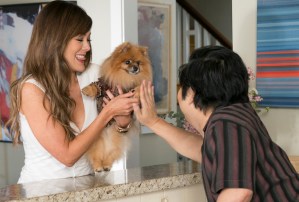 THE CASE FOR CUTTING | Thus far this season, Splitting Up Together is averaging 2.9 million total viewers and a 0.7 demo rating, down sharply from its spring 2018 run and delivering less retention out of black-ish than it used to (82 percent vs. 100 percent). Season to date, it stands as ABC’s lowest-rated non-Friday sitcom, while delivering the second-smallest audience of any of the network’s laffers.

What’s more, while we’re all in on Lena and Martin — and like their youngsters, especially sensitive Mason (Van Crosby) — we’re a lot less invested in the B-stories that are woven around the couple’s besties and Lena’s pregnant sister. So maybe Lena and Martin’s new beginning really should be a happy ending to an overall good-but-not-great show that’s run its course.

Vote below, then state your own case for keeping or cutting Splitting Up Together.